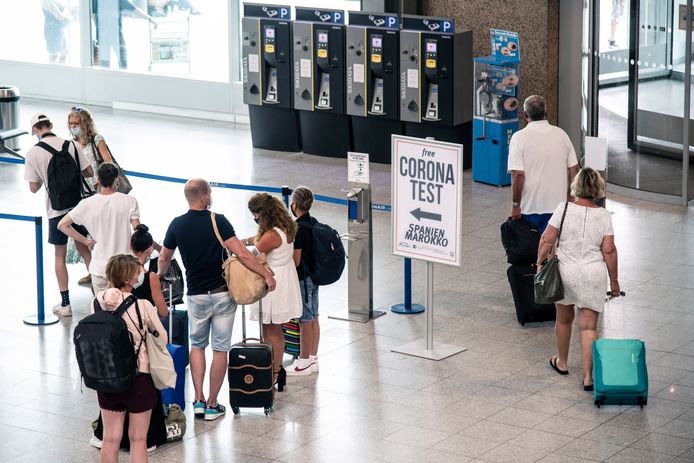 At Airport Weeze, just across the German border near Nijmegen, travelers from high-risk areas can have themselves tested for the corona virus. Mandatory for Germans, but also available for holidaymakers from the Netherlands. However, they show themselves only marginally in the test street.
Holger Terhorst, manager at Airport Weeze, takes another look at his watch. Almost half past three. The plane of budget airline Ryanair from Ibiza has already started landing. Fifteen minutes early. “That’s always the way with Ryanair,” Terhorst says, laughing. “If they don’t land on time, they are too early. You can almost set the clock on it. “” But that means immediate work to be done. A real corona test street in the terminal of the airport is being prepared in haste. Employees of the Kassenärztliche Vereinigung Nordrhein – the German health service – prepare registration forms, a doctor puts on a kind of astronaut suit.

Free for Germans and Dutch
The Spanish party island of Ibiza, where the Ryanair plane comes from, is known as a risk area in Germany. The number of corona infections has risen so rapidly in recent weeks that the German authorities fear that returning holidaymakers are carrying the contagious lung virus. To rule that out, travelers living in Germany are required to undergo a corona test. “That can be done within three days of returning,” said Christopher Schneider of the health department. “In theory, travelers can go home and make an appointment with the doctor to have a test, but it is that easy at the airport.” “The results usually follow within 48 hours. Until then, staying at home is mandatory. Everyone who is tested will receive a unique QR code, with which the result can be viewed online. The test is completely free, the costs are covered by the German government. For Germans, but also for Dutch.

“Don’t see the point of a test”
Just before four o’clock, the first sun-tanned Ibiza travelers trickle into the arrival hall. Some travelers shuffle somewhat hesitantly towards the improvised test street. In no time, however, a row is created, which then flows through at a rapid pace. It turns out that administering a corona test takes less than two minutes. It is a well-oiled machine: the doctor expertly inserts a cotton swab into the noses and throats of the holidaymakers, who are then taken directly to the exit of the airport. What is striking: it is mainly the Germans who submit themselves to a corona test. Many Dutch travelers skip the medical check. This is also the case for 31-year-old Sven from Arnhem (“no last name, because he doesn’t want any hassle with RIVM”), who smokes a cigarette outside the terminal. “I feel fit, don’t see the point of such a test. If I get complaints, I will stay at home. “” The fact that he has to be quarantined for the next ten days anyway – Ibiza is also a risk area in the Netherlands – is new to him. “None of it. When I left for Ibiza, things were still safe. In any case, I think that quarantine is nonsense, how do they want to control it at all?”

Few infections
In addition: where in Germany a negative test result is a license to be allowed out of quarantine, Dutch people from risk areas are obliged to stay at home for ten days. Even if they can submit a negative result, a spokesman for the RIVM reports. “A test is always a snapshot. The test does not show whether the disease will develop at a later time. “” How many Dutch travelers nevertheless have themselves tested at the airport is difficult to estimate, according to Schneider. On average, half of the passengers from the risk areas – in addition to the Spanish destinations, these are also flights from Morocco – already have themselves tested at the airport. So far, the number of infections is not too bad, he concludes.

Only one traveler at Airport Weeze tested positive for the corona virus this month.