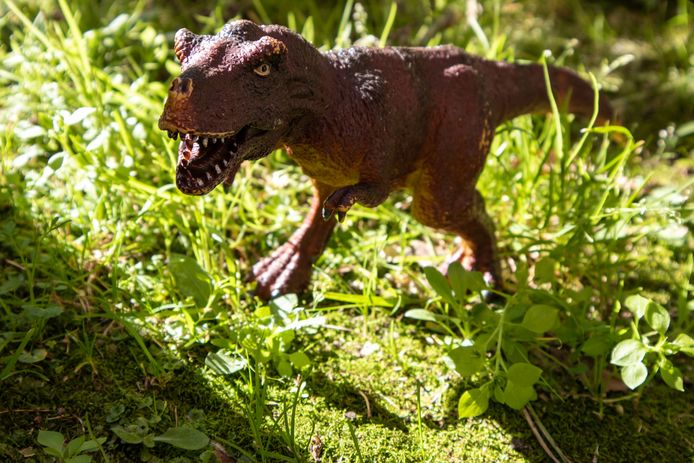 “Look honey, surprise!” Brit spruces up the garden with tyrannosaurus on the way

“Do something nice with the garden,” cried Adrian Shaw’s wife from Lillington, Warwickshire, UK. Shaw didn’t have to think about it for long. “What looks nicer in a backyard than a three and a half meter long tyrannosaurus ?!” “And so the Briton bought a model of the prehistoric carnivore online for £ 1,600, about € 1,800. “She loves the Jurassic Park movies, it can’t go wrong”.
The local residents were surprised when Adrian’s order was delivered on a Thursday afternoon and was hoisted in his garden with an enormous crane. “I think a lot of people dream of a T-rex on the way in their yard,” he says delighted to the Leamington Courier. “Most people don’t have the space or the resources to make their dream come true, but I’m lucky.” However, Adrian was not entirely sure that his wife Deborah would be just as full of the antediluvian garden image. “I hope my wife will be thrilled when she comes home from work and sees what I’ve done with the garden,” he said hopefully of his unique acquisition. “She loves the Jurassic Park movies and has seen all of David Attenborough’s documentaries, so you can’t go wrong with this purchase.”

Pee in the garden
Although her request was to make the garden “more fun”, the Briton took into account that he would have to convince her a little. And that was right. Deborah didn’t come straight home from work, but went to the gym. By the time she got home it was too dark to look at the monster. That surprise came when she let the dog pee in the yard at 4 AM. “While I was sleeping, she took the dog outside and turned on the garden lights,” says Adrian. Deborah got the shock of her life when she came face to face with the T-rex, now baptized Dave. “She told me in” colorful words “what she thought about it and that didn’t sound very pleasant”. ” Still, there is a good chance that Dave will stand. “The kids are begging to keep him, which is sad because they are well into their twenties.”