A Merry Christmas from

The blog post of the entire holiday  will be posted about 23 November 2019.

A week ago I started a fundraising campaign for the benefit of the research about cancer, here in Nimwegen, at the Radboud University Medical Center. I want to collect donations, I donate myself on a yearly basis of € 1,000.00 and I want to organise a beneficiary concert by the Nijmegen Byzantine Choir.

Via this secured link: Singing for Oncology you will see the website of the Radboud Oncology Fund and my own page on it: Singing for Oncology. If you want to donate, you can do it in several ways. Within the Netherlands you can use the “iDeal”-payment, outside the Netherlands you can use a creditcard:  Master Card, Visa and American Express. When you donate, fill out the required text fields:

Click on: “Naar betalen” (= process payment) and fill out the fields of your creditcard. When you click on the next box, your payment will be processed, and you will receive an email. The “Singing for Oncology” will also receive an email.

De Graafseweg will be undergoing major changes. The stretch from Rozenstraat (just behind the bridge over the rail track) to Wolfskuilseweg goes from four to two lanes. The section from the Wolfskuilseweg to the Cavaljéweg (a line of about 400 meters) remains four-lane, but gets narrower lanes. According to the lord mayor and aldermen, the changes ensure that traffic from outside the city no longer uses the center as a transit route to Arnheim. In the new situation, cyclists also get more space thanks to the construction of a wider cycle path or service road. Work on the Graafseweg will start as soon as the renovation on the Waal bridge is completed. This is estimated at the beginning of 2021. The Commission expects motorists to be on the Graafseweg for a maximum of 15 seconds in the new situation. According to alderman Harriët Tiemens, the redesign of the Graafseweg has many advantages: ,,It will improve road safety and quality of life. The Graafseweg is now sometimes used as a highway. We really have to get rid of that.”

Also new: a bicycle crossing at the Cavaljéweg. This would mean that the current bicycle crossing at the Verbindingsweg, just under a hundred meters away, would be removed. Two years ago a serious accident took place at the Verbindingsweg, in which a 31-year-old cyclist died. Tiemens: ,,The planned adjustment also has everything to do with safety. The Connection Road is not a logical place for cyclists to cross.” The narrowing means that there will be room to construct a wider cycle path or even a service road on the residents’ side of the Graafseweg. That happens in consultation with the residents, says Tiemens: “They have the best view of that.” The number of lanes remains intact between Wolfskuilseweg and Cavaljéweg. “If we remove lanes there, there is a chance that nearby roads will be used as shortcuts and become overloaded.” 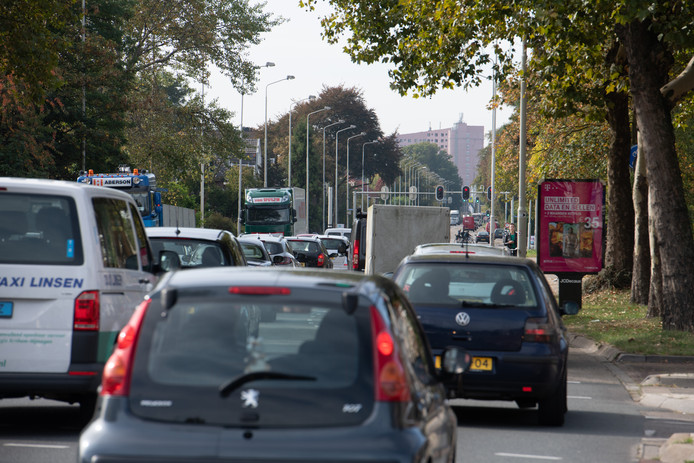 Previous work on the Graafseweg

In 2017, the section between Keizer Karelplein and Rozenstraat was already reduced from four to two lanes. Research has since shown that the effects of this on car traffic are minimal. According to the city council, the layout of the Graafseweg is still largely the same as in the seventies of the last century, when it was considered an important route between the north and south of the Netherlands. With the arrival of the A50 in 1976 and the construction of the bridge “The Crossing” in 2013, the Graafseweg no longer has that function. A narrowing is therefore only logical, according to the commission. GroenLinks, the largest party in the Nijmegen city council, also believes that changes to the Graafseweg are necessary. “There are reports of motorists driving 114 kilometers per hour on the Graafseweg,” says councilor Quirijn Lokker. ,,The redesign greatly increases the quality of life for local residents. There are hardly any disadvantages for motorists.”

Not everyone agrees with this: the Nijmegen groups from the VVD, Stadspartij DNF and VoorNijmegen, among others, have always strongly opposed a narrowing. That is no different now. “An idiotic plan,” says Maarten Bakker (VVD). “Why should bicycle paths be widened there? I have never heard of bicycle jams on Graafseweg. And liveability can also be increased without lanes disappearing. For example, consider extra green spaces along the road.” Finally Bakker finds changes to the Graafseweg premature: ,,Why don’t we wait until the s100 (route over Energieweg and The Crossing) flows through properly before we even start thinking about these kinds of things?” coalition partner SP is critical. “First I want to get all the facts right,” says SP leader Hans van Hooft. ,,What does an adjustment to the Graafseweg mean for the surrounding neighborhoods? On what does the alderman base the 15-second delay? If I am honest, I see few clues for this plan at the moment.”

“I see it as my duty to cherish this house”

In the series The most beautiful house in Nijmegen this time a look at Jurriaan Gerritz, resident of Sint Annastraat 175.

,,This house, from 1910, is of incredible beauty, with a mix of styles. All original elements have been preserved and beautifully restored by the previous occupant. Even the garden is original. If you cycle past this building, you will hardly notice it. The façade, with blue natural stone and sober ornamentation, is understated: Dutch Jugendstil. The tower at the top seems low, but inside it is twice as high. Inside you enter the spacious hall with the beautiful staircase. A bit of English country house style. The hall serves as a living space there. We also use it as such. Sometimes we eat here with a lot of people. And beautiful, that skylight with stained glass on the roof. Also special.”

,,During the Four Days Marches, a lady suddenly stood at the door. She was the granddaughter of the man who built this house for himself, one of the Haspels brothers. These were leading designers and builders who left a big mark on the Nijmegen canals. We took a picture of her on the stairs. She will tell us more about the house one day.”

,,In the interior you can see the Arts and Crafts movement, which connects art and craftsmanship. Painting of walls and ceilings. Stained glass windows with details of flowers, bees … I still keep discovering things. For example, I found a wood paneling behind a panel. With this technique, a more expensive type of wood was painted on a cheap plate. And I discovered a place where a fireplace had been.”

,,It’s a family home. We would move here after the sale, three years ago, when my father-in-law fell. We have adapted the house so that he could live here on the ground floor. We are a few doors down, but we also use this property. It is wonderful to be here with friends, or alone, without the hectic pace of family life. Or to come together with people for dinners or parties.”

“Some friends live upstairs and there is a practice room. My father, a painter, uses the house as an exhibition space. The intention is that we will withdraw here in a while. I see it as my task to cherish this house and make good use of it.”

The marches start next Tuesday. Prior to the start there are two days for the registration; showing your email confirmation for  participation you get a plastic wristband, with QR-codes on it (picture below); the QR-codes contain: subscriptionnumber, distance you walk every day, and a start code. The start codes are a walking shoe and a gladiolus. The gladiolus indicates early starts (6.45am) on Tuesday and Thursday, and late starts (7.30am) at Wednesday and Friday. Pierre and I have -as walking shoe- the opposite schedule. The term “30km/20M per day” is also rather relevant: day 1 33.2KM/22.13M, day 2 33.6Km/22.4M, day 3 30.5Km/20.33M and day 4 30Km/20M. Plus each day  home-start and finish-home = 6.32Km/4.21M. In total we walk the total of the daily marches plus 4 times the return trips home-start/finish = 152.6Km/101.73M. The average distance per day (home-start-march-finish-home) is 38.15Km/25.43M.

On duty as a volunteer in the St Stephan Church: a musical intermezzo bu the organ player Ton den den Hout, Emeritus Professor at the Radboud University, Nijmegen.