UK weather: Heatwave to bring highs of 37C on hottest day of year – before lightning, flooding and hail 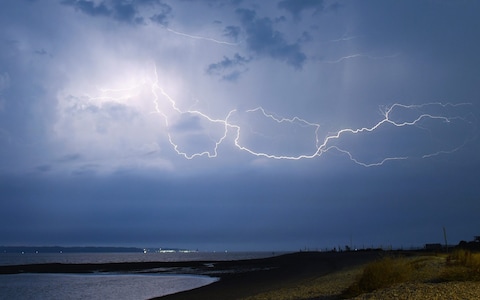 The British heatwave could bring its most intense conditions yet with forecasted highs of 37C (98.6F) on Friday accompanied by severe thunderstorms. After some storms early on Friday, motorists are warned ahead of lightning, flash flooding and large hailstones that could hit eastern areas in the afternoon, with a sever weather warning in place for the afternoon until just before midnight. Temperatures are forecast to be in the mid-30s for much of east and south east England, reaching an estimated 37C in London on so-called Furnace Friday. That would make it the hottest July day ever – the previous record of 36.7C was set in Heathrow in 2015. And the mercury could rise higher still if there is a lot of sunshine, Met Office meteorologist Alex Deakin said. There is a chance the all-time UK record of 38.5C (101.3F) could be broken, with the hot weather set to continue into August. Meanwhile, cross-Channel rail passengers face difficult journeys after o 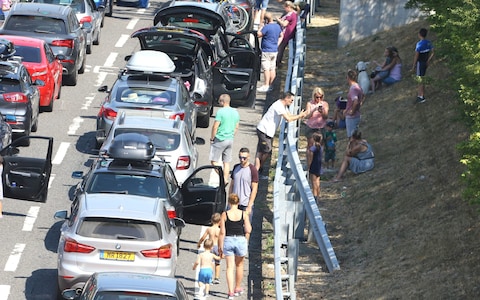 perator Eurotunnel cancelled thousands of tickets as “extreme temperatures” caused major disruption to services. The firm took the “unprecedented decision” to stop passengers from travelling on Friday if they were due to return on the same day or Saturday in a bid to ease long queues. Passengers had faced delays of up to six-and-a-half hours on Thursday when air-conditioning units failed on trains. Mr Deakin said: “The reason there’s some uncertainty is because of the thunderstorms, how many we see and where they get going … torrential rain, the risk of local flooding, large hailstones potentially damaging, lots of flashes of lighting and rumbles of thunder. “Roads like the M11, M18, M1 and A1 won’t be very pleasant, a lot of spray and surface water around.” Thursday saw the hottest day of the year so far, with temperatures reaching a peak of 35.1C (95.1F) at Heathrow. A mix of toxic air, extreme highs, emissions from the continent and a lack of cloud cover caused a “high” air pollution alert to be issued for London. Meanwhile, authorities said the heatwave was causing “winter conditions” in parts of the NHS, while many nurses were said to be dizzy and exhausted. Fire brigades 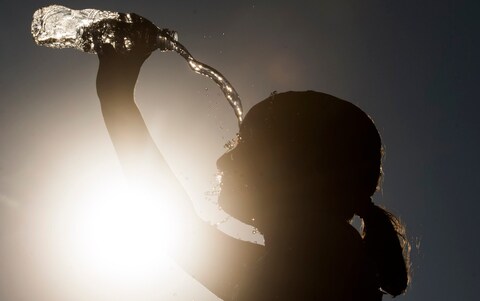 also called for a ban on BBQs in parks and drivers were urged not to throw rubbish following a string of grassland fires in recent weeks. Going into Friday night, more showers will come into parts of Wales, south west England and northern Ireland in a sign of things to come for the weekend, Mr Deakin added. Most places will see temperatures closer to average for the time of year, around the high teens to low 20s, with the chance of showers and strong breezes, Mr Deakin said. Some areas will see a more than 10C drop between Friday and Saturday. He added: “Weather fronts are trying to come in from the Atlantic and eventually they will do so. And that has the impact of ousting the really hot and humid air .. it turns runs cooler for the weekend, fresher, more comfortable at night…”.

Britain unprepared for heatwaves, warn MPs as Friday could be hottest day on record at 38.5C

Britain is unprepared to cope with heatwaves, a major report by MPs has warned, as the Met Office forecast that the UK could see its hottest ever day on Friday, with temperatures reaching 101F (38.5C). The Environmental Audit Committee said adapting to a warming climate was now a ‘matter of life and death’ and without action, thousands of people will die each year. The committee warned that building regulations brought in to make modern homes and offices more energy efficient had left householders and workers sweltering in overly-insulated buildings, with little ventilation, and called for updated guidelines.  And they said road and rail services had not been built to cope with hot weather, with just half of Britain’s motorways surfaced with material that can withstand high temperatures, and rail tracks increasingly at risk of buckling, causing serious timetable disruption. The Royal College of Nursing warned that people were already ‘vomiting and passing out’ from the heat and MPs said public health guidance should be issued to to employers and schools to relax dress and uniform codes and allow flexible working.

A survey carried out by the committee also found that schools are so hot in the summer than nine in 10 teachers are forced to personally buy fans to make classrooms bearable. MPs warned that by the 2040s Britain will face similar heatwaves every two years, and called for a minister be appointed to tackle the growing crisis. Mary Creagh MP, Chair of the Environmental Audit Committee, said: “Heatwaves cause premature deaths from cardiac, kidney and respiratory disease. There will be 7,000 heat-related deaths every year in the UK by 2050 if the Government does not take action. “The Government’s new adaptation plan promises no effective action to prevent overheating in buildings. “It must change building regulations and planning policies to ensure homes and transport networks are able to deal with extreme heat, and that local authorities and cities have green spaces and heat-resilient infrastructure.” A Level 3 heat health watch alert covering a large part of England has been issued by the Met Office and Public Health England, warning people to stay out of the sun and keep their homes as cool as possible. Britain is just one stage away from a national emergency, which will be triggered if healthy people start becoming seriously ill from the heat. But visits to the NHS Choices website have already risen 450 per cent as people struggle to cope with heat exhaustion and sunstroke. Wendy Preston, Head of Nursing at the Royal College of Nursing, said: “The heat is already affecting patients in health and social care settings up and down the country. “Our members have reported people vomiting and passing out, and it is clear the UK’s health care infrastructure is simply not designed to deal with increasingly hot summers.” “This summer is just a taste of what could be in store for the UK in the face of climate change, and the Government must act now to prevent a major public health crisis.” The Met Office said the heatwave will peak on Thursday and Friday with temperatures rising to 98F (37C) and beyond in southeast England. The highest temperature ever recorded in Britain was 101F ( 38.5C) at Faversham on 10 August 2003, but forecasters said Friday could beat the record. Paul Gundersen, Chief Meteorologist at The Met Office, said: “The heatwave conditions will continue across much of England, with temperatures into the mid to high 30s Celsius in many places from the Midlands eastwards on Thursday and Friday and it’s possible that we could break the all-time UK record of 38.5° C if conditions all come together.” Thunderstorms are expected to bring a temporary relief for some parts of Britain over the next few days, before the heatwave returns next week.