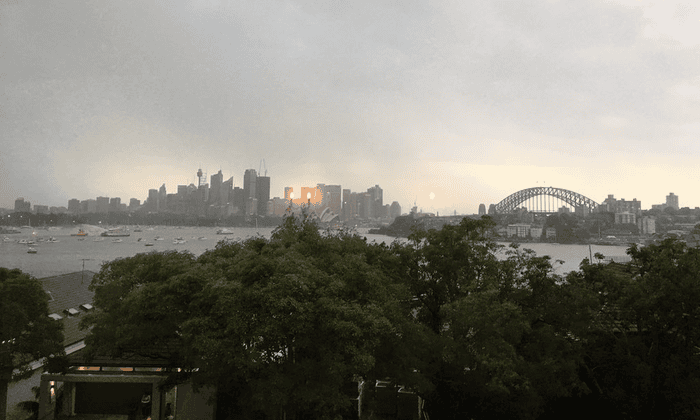 Thousands of people waiting to watch the New Year’s Eve fireworks around Sydney harbour were battered by torrential rain as a thunderstorm swept the city hours before midnight. On Monday morning the Bureau of Meteorology had predicted the “chance of a light shower/thunderstorm” in the evening, most likely in the west of the city. Otherwise, it said, “a warm, partly cloudy night” was expected. But by mid-afternoon thunderstorm warnings for inland areas had been extended to Sydney, the Hunter and the Illawarra, and the city was hit with a succession of huge downpours from about 5pm. The storms quickly brought 8mm of rain and dozens of lightning strikes, forcing the cancellation of the 8pm aerial flyover display. People had arrived early on Monday to set up picnic blankets at popular spots including the ends of the bridge, the Opera House and Mrs Macquarie’s Chair. Jeroen van Druten and his wife Miranda – holidaying in Australia from the Netherlands – said they had watched Sydney’s fireworks on television for years. By 11am they had parked themselves under the bridge at The Rocks with a bag of supplies as temperatures climbed toward 30C. “You hear from everyone it’s very busy, crowded, so to get a good spot you have to be early,” Van Druten told AAP. “It was on our bucket list.” This year’s $5.78m Sydney NYE show will comprise 8.5 tonnes of fireworks, more than 100,000 individual pyrotechnic effects and 35,000 shooting comets. Earlier on Monday the city’s lord mayor, Clover Moore, lashed out at the state government over the increased commercialisation of New Year’s Eve around the harbour, calling the increase in ticketed events “outrageous”. Of the 51 official harbourside events on the City of Sydney’s website, 19 are ticketed, with prices as high as $335. A number of ticketed locations – including Hickson Road reserve in The Rocks and Pirrama Park wharf at Pyrmont – were previously free. On Monday, Moore said all the ticketed events were on land held by state government agencies. “I frankly think that is outrageous that they are trying to make money out of something that we are putting on to bring the community together harmoniously and to celebrate the beauty of our city and our creators,” she said.