More and more farmers are moving away from Farmers Defense Force.

More and more farmers are publicly distancing themselves from the radical action group Farmers Defense Force. The menacing language of foreman Mark van den Oever is a shock to his colleagues. Nevertheless, the group retains its place in the consultations on nitrogen issues. The Agriculture Collective, a collection of thirteen farmers’ organi-zations, has closed the rows. Also Farmers Defense Force is still part of it after the latest slip of the leader Mark van den Oever. Negotiations with Prime Minister Mark Rutte and Minister Carola Schouten about a farmers’ agreement are resumed.  But among farmers, support for the radical action group is crumbling. “The expiration date of Farmers Defense Force has passed,” says Dennis Hurkmans, farmer from Nistelrode. He is completely done with the threatening language of Van den Oever, who lashed out on Wednesday at the “meat bosses and dairy bobos” who “betray the sector as Judas”. Earlier, the Farmers Defense Force leader made a Holocaust comparison that went wrong in many people. The apologies that the action group made on Wednesday evening (“wrong words”) are too late for Hurkmans. “We farmers can no longer stand behind the Farmers Defense Force with healthy farmers’ minds. A club with a totally crazy and crazy leader.”

Fear of colleagues
According to Hurkmans, there are more farmers who share his ideas, but not everyone dares to speak out for fear of reactions from colleagues. Annechien ten Have, a farmer’s wife from Beerta in Groningen, does. Although she initially had her doubts. “I was afraid to be pilloried. But in the end I thought it was too important to make this sound heard.” She openly distances herself from Farmers Defense Force, mainly because of that club’s “intimidating” and “threatening” language. “The size is full, I’m really fed up,” she says. “It was not the first time either. Yes, you can be quite bright. Because there is a lot wrong with the way farmers are treated. But you shouldn’t fight evil with evil.” The sector still agrees that farmers are being disproportionately charged for nitrogen emissions by ‘The Hague’. The division of the farmers’ protest is mainly in the tone of FDF. He consciously chooses big words to make an impression. “If you are sewn, you can be angry,” said Van den Oever. On Thursday he kept a low profile and never answered questions.

Incident too much
For the Brabant farmer Hurkmans, the offending “Judas statement” is an incident too much. As far as he is concerned, the role of FDF has been played. ,,They have raised the issues, they earn the credits for that. But they don’t have the capacity to talk to. History has proven that. We have to wait for the next riot.” Linda Janssen also does not rule out a new incident. She is chairman of the Producers Organization for Pig Farming (POV, member of the Agricultural Collective). Janssen states that it is “an illusion to think that you can silence Farmers Defense Force.” “Of course what they say and do radiates to the collective. It is really not nice that you drive to The Hague for nothing because the consultation is canceled, while you have prepared that conversation well and have the idea that the parties are not so far apart.” Still, Janssen remains confident in Farmers Defense Force as a member of the collective. ,,We are there as a collective with one goal, let’s keep that in mind and discuss the content. Apologies have been made, as far as I am concerned we can continue.”

This applies to all parties in the collective who distance themselves from the Judas and Holocaust remarks, but who want to continue with Farmers Defense Force. Janssen compares the Farmers Defense Force with the activists of Greenpeace. You don’t always have them on a string, but because of their unorthodox actions you sometimes achieve what you would otherwise not achieve.

“What Farmers Defense Force does is not take action, but intimidation”

There is a slaughterhouse in Boxtel (province of North Brabant) where 20,000 pigs are slaughtered every day. A sample in June revealed that 1 in 3 employees there was infected with the corona virus. Still, the virus fire remained open, otherwise farmers could not get rid of their animals. Our meat industry is organized so efficiently that tens of thousands of pigs have to die every day. A debatable decision, because there is still no clarity as to why slaughterhouses are so often affected by the virus – is it the labor migrants, the cooling systems or the dead animals? No wonder that inhabitants of Boxtel are worried. They don’t want Vion to become the next Tönnies. A group of people from Brabant therefore took to the streets a few weeks ago.

When Farmers Defense Force found out, the club took a counter action. A call went out to members: “We are making a very clear statement that everyone, and I mean everyone, is leaving our sector with their counterparts!!!” They did that by taking pictures of the demonstrators’ number plates. Afterwards, Farmers called on the Defense Force to share photos and videos of the “extreme vegans and animal extremists” on Facebook. It was insinuated on social media that the protesters had followed home to find out their addresses. “Then we will soon know who these people are and the net will slowly close around them! From anonymity to full publicity. After that, these people are allowed to answer.” The page has been removed, but has been recreated.

Now let’s call the beast by name: what Farmers Defense Force does is not campaigning but intimidation. “You can think of Farmers Defense Force as a pit bull hanging in your pants. We have been bitten and will not let go until our demands are met”, said a regional Farmers Defense Force action leader in Farm magazine. Since a pit bull is not exactly a peaceful animal, I think this is a scary comparison. But even more frightening is the message that the farmers’ club does not tolerate no. That is downright undemocratic and can only lead to further radicalization. Because what does the Farmers Defense Force do with people who don’t share their opinion? Last Saturday, foreman Mark van den Oever said in the magazine to this newspaper that he would “do everything he could” to reduce Jesse Klaver (leader Green Party) and Tjeerd de Groot – the D66 Member of Parliament who stated that the livestock should be halved. That seemed an implicit threat to me, but afterwards the conversation happily continued talking about Van den Oever’s newborn son. Monday came out that De Groot has filed a report for death threats in Facebook groups of radical farmers’ clubs. It would be good if journalists were less naive towards the Farmers Defense Force.

But more importantly, politicians, and in particular Minister Carola Schouten, must speak out much more firmly against the intimidation of citizens and politicians by angry farmers. I’m afraid I know why she doesn’t: Schouten also has a car with a number plate, an address and a son. And no sense to be “reviewed” in a Facebook group of radical farmers.

Dozens of farmers on tractors stopped by the police and sent away from Nijmegen. 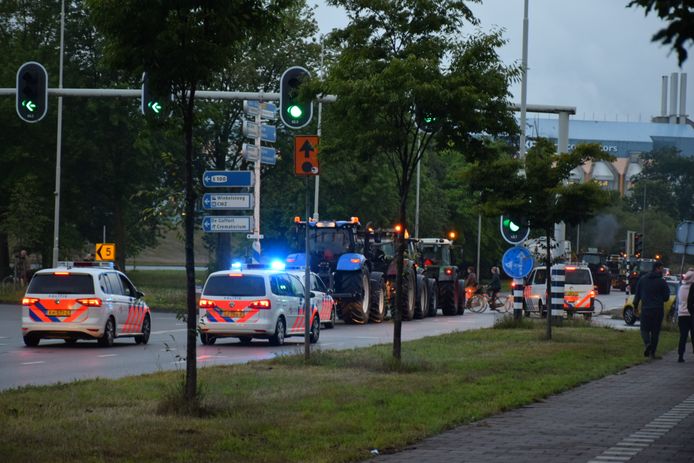 Thursday 09 July 2020, 09:00pm. Dozens of farmers on tractors drove honking through Nijmegen on Thursday evening. They seemed on their way to the center, but were stopped by police on the Graafsebrug. Then they were escorted out. On the Graafsebrug over the railway, near the city center, the police blocked the farmers’ way. Before that they were honking on the Graafseweg. It is not known whether the farmers wanted to occupy the Keizer Karelplein as before this year. At the time, the Lord Mayor of Nijmegen, Hubert Bruls, did not like an unannounced protest in the square. The police also blocked the access roads to Takenhofplein. That way they could get the farmers out of town quickly. The farmers probably came mainly from villages such as Nederasselt and Schaijk.

To the house of “nitrogen fighter” Vollenbroek
A group of farmers also came to Nijmegen last Tuesday. Then they wanted to drive to the home of “nitrogen fighter” Johan Vollenbroek, but they were stopped by the police and taken to a site near the Pathé cinema near Lent. There the farmers discussed with Vollenbroek, who had been picked up at home by the police. Farmers are still allowed to demonstrate with a tractor in this region, while protests with tractors have now prohibited it in other regions.

There are nation wide protesting farmers of the new rebellion organisation “Farmers Defence Force”. In the provinces Groningen, Friesland and Drenthe their manifestations are now forbidden by a court order.  The farmers are still obstructing highways, distribution centers of large firms all over The Netherlands, and last but not least the Governamental Center in The Hague. In the beginning (December 2019) they could count on the support of a large part of the Dutch population; when the Corona outbreak came (first case on 27 February 2020), they continued their activities. And that was not appreciated very much by the Dutch.

Mrs. Carola Schouten (b. 06 October 1977 ‘s-Hertogenbosch, unmarried mother of Thomas Schouten b. 2001), Deputy Prime Minister of the Netherlands and Minister of Agriculture, Nature and Food Quality, is a daughter of a farmer herself. She does not shy away from discussions with farmers. On Wednesday she had to call off a working visit to farmers in the province of Zeeland, as the police advised her to stop the visit because of intercepted threats.