The Duke and Duchess of Sussex have released their 2019 Christmas card, featuring their young son Archie.  The card, which was sent to friends and colleagues on Monday, includes a picture of the Duke and Duchess with their seven-month-old son crawling towards the camera with the message “Merry Christmas and a happy new year”, adding “from our family to yours”.

The photo was reportedly taken by the Duchess’ friend Janina Gavankar, an American actress and musician, who attended the couple’s Windsor Castle wedding in May 2018. The card was released on Twitter by the Queen’s Commonwealth Trust Twitter account, along with the caption: “Just sharing the sweetest Christmas Card from our President and Vice-President, The Duke and Duchess of Sussex. Very Merry Christmas, everyone!”

The family of three are currently on a six week sabbatical in Canada, where the Duchess filmed the US series Suits, and will not join other senior royals at Sandringham for Christmas.

The Duke of Sussex has spoken of how his three-day-old son Archie has “given him a new focus and goal”, teaching him the “miracle” of new life after the challenges he faced following the loss of his mother. The Duke, who was in The Hague for the launch of the one year countdown to the Invictus Games, told of his pleasure in knowing his baby had made “a lot of people happy”, saying he was still “very quiet” at just a few days old. Having left Archie at home in Windsor with the Duchess to return for one day of work, he spoke of the joy his baby son has brought but advised a fellow father-to-be to learn his lessons and not plan too much after the baby’s arrival.

During a bike ride around the Zuiderpark, the Duke had a candid conversation with former soldier Dennis van der Stroom, 31, about mental health and parenting, speaking poignantly of the loss of Diana, Princess of Wales. Archie Harrison Mountbatten-Windsor was born on Monday morning, with the Duke appearing to abandon the idea of paternity leave with one engagement today another already announced for Tuesday.

“Above all, he said he was just 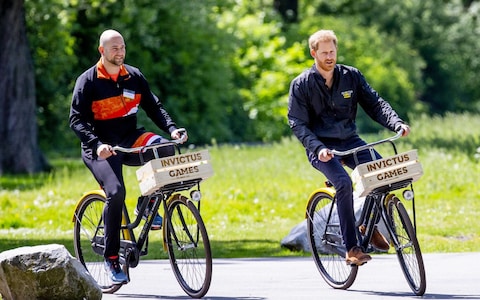 by the miracles in the world, and how his child has made a lot of people happy,” said Mr Van der Stroon. “He also told me he’s really happy that his son is so far very quiet.“ But he also told me not to make too many plans and that there’s no way you can plan for when the baby arrives. The Invictus athlete, who served in the army from 2006 until 2011, described his conversation with the Duke as “amazing and emotional”. “At a certain moment, we just got connected on this level,” he said. “We talked about how my wife, Mireille, is 20 weeks pregnant with our first child, a girl, and he told me how special it was that his son has just been born. “Harry talked about how having a small child was his new focus and new goal and I told him how a couple of months ago, I was struggling with my mental health but my wife’s pregnancy has given me a goal.”

Van der Stroon was a Corporal First Class and served on operations in Uruzgan, Afghanistan. In 2014 his mother, Marion, died aged 58 from chronic lung disease, and in 2015 he was diagnosed with PTSD, triggering what he described as a “domino effect” of mental health issues. “I told Harry about my mother and we talked about our shared experience of missing a mum,” he said. “He said missing a mother is like missing some kind of security, how you need that as a son and it falls away when you lose your mother.” 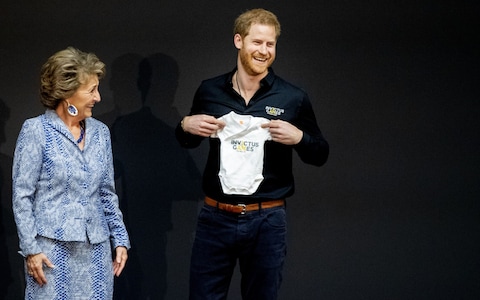 The Duke, who had pretended to prop his eyes open with tiredness as he arrived at a sports stadium in The Hague, will travel home with a new soft rattle toy, a stuffed bird, some newborn socks with “I love Daddy” written on them, and a special Invictus Games babygrow for Archie. His branded jacket was embroidered with the word “Daddy”. Chatting to a friend in the arena, he discussed how fatherhood was the “best thing he will ever do”.

JJ Chalmers, a former Invictus star and broadcaster who has become a friend of the Prince, disclosed: “He said it’s amazing but it’s hard work. He said that Archie slept for the first 24 hours like all babies do… and then he woke up.”

After months of speculation about the royal baby’s name – we finally have the answer. The Duke and Duchess’ boy is called Archie Harrison Mountbatten-Windsor. But the newborn will not be given a courtesy title after his parents decided they would like him to be known simply as Archie. The baby will have the title “master” for formal correspondence while a child, instead of being an earl or a lord. The Sussexes could have chosen to give him the title of Earl of Dumbarton, one of the Duke’s subsidiary titles available to his firstborn boy. They could also have opted for Lord Archie Mountbatten-Windsor to ensure gender equality with any future sister. But he will be known as Master Archie Mountbatten-Windsor, as the Duke and Duchess of Sussex take their first steps toward giving the seventh-in-line to the throne the most normal upbringing they can muster.

A spokesman for Buckingham Palace said that, while there were titles that Their Royal Highnesses the Duke and Duchess of Sussex could apply to their son, “they have chosen not to give him a courtesy title at this time”. This could be revisited when the Prince of Wales one day becomes king, under a 1917 convention allowing the grandchildren of the monarch to be known as HRH Prince or Princess. He will also be entitled to succeed Prince Harry as the Duke of Sussex. The Duke and Duchess’s decision is understood to be their own, with the Queen happy to allow them free choice over their children’s names. The Duke has previously spoken frankly about the difficulties he experienced while growing up as a member of the Royal family, with the title carrying responsibility as well as rights.

In 2015, he disclosed he had once felt so disillusioned he “wanted out”, considering giving up his title before conceding he could use it for good. Being in the Army as Captain Wales or simply “Harry”, he has said, was the “best escape I’ve ever had”. He has since appeared to embrace the benefits of his royal platform, using his position to further an array of charitable causes on the world stage. The Sussexes’ decision also reflects the choice made by Prince Harry’s aunt, the Princess Royal, whose children were known from birth as Peter and Zara Phillips. Zara, now Mrs Tindall, has embraced the freedom, which has required her and her brother to forge their own professional paths and enabled her to earn a living via sponsorship as a sportswoman. “I’ve been very lucky,” she has said in an interview. “My parents didn’t give us titles so we’ve been able to have a slightly more normal upbringing. “As soon as you’ve got a title, it’s difficult to shed it. My brother and I have been very lucky like that, being able to find our own way.”

As Archie Mountbatten-Windsor, Baby Sussex is free to do the same, joining his parents on the global platform they have cultivated. By actively announcing the decision to eschew all titles, the Duke and Duchess have also neatly avoided the inevitable comparisons with the Cambridge children, who were all named HRH Prince or Princess at birth. Some had feared the Earl of Dumbarton title would prove confusing for fans of the Sussexes around the world, who could perceive it as a snub owing to the disparity in rank. While unlikely to have been a primary consideration for the couple, the lack of a traditional British title will also serve to simplify matters for the American media which already persists in referring to “Duchess Meghan” and may have used “Earl Archie” for ease. The Duke of Edinburgh, who met Archie at Windsor Castle on Wednesday, may have been pleased to learn that he is taking the surname Mountbatten-Windsor after he famously insisted his descendants bear the family name. He joins Lady Louise Mountbatten-Windsor, the daughter of the Earl and Countess of Wessex, in the style. Penny Junor, a royal biographer, said: “It’s exactly what I would have expected from Harry. He would have dearly liked to have been a normal boy growing up and found his title very difficult.”