The place where Vincent van Gogh (1853-1890) made his last masterpiece Tree Roots just before his death has been discovered. 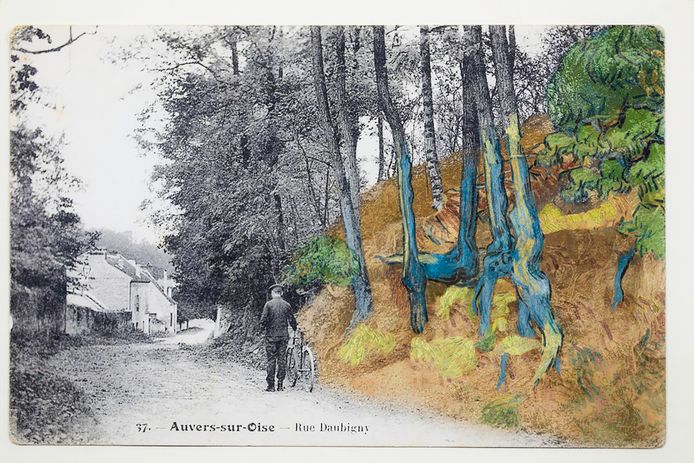 The location is in Auvers-sur-Oise, France, near the inn where the famous painter stayed at the time. According to the Van Gogh Museum in Amsterdam, it is spectacular that the largest tree stump from the painter’s last work is still present and recognizable. The location, which is also open to the public, was unveiled on Tuesday in the presence of, among others, the general director of the Van Gogh Museum, Emilie Gordenker, and Willem van Gogh, great-grandson of Vincent’s brother Theo. Wouter van der Veen, scientific director of the Institut Van Gogh in Auvers-sur-Oise, made the discovery. He recently found an old postcard from 1900-1910 depicting a hillside overgrown with tree trunks and roots, which was very similar to Van Gogh’s canvas.

Van der Veen presented his find to researchers at the Van Gogh Museum who conclude that it is very likely that it is the same place. The shape of the hill edge, the roots, their mutual proportions, the composition of the soil and the steep limestone wall correspond. “The sunlight that Van Gogh painted indicates that the last brushstrokes were applied in the late afternoon, providing information about the layout of this dramatic day that ended with his fatal self-injury,” said Van der Veen.
According to researcher Teio Meedendorp, the vegetation on the postcard shows “very remarkable similarities with the root shapes in Van Gogh’s painting”. “He must have walked past it often on the way to the vast fields behind the castle of Auvers, where he also painted several times in the last week and eventually got his hands on himself.”

For a long time it was unclear which painting Van Gogh made last. In 2012, researchers at the Van Gogh Museum concluded that this must have been Tree Roots. It is also striking that this work, which is in the museum collection, is not completely finished. They based themselves on notes by art collector Andries Bonger, who describes a painting that Van Gogh is said to have made shortly before he died in July 1890.

Take a tour in the Rijksmuseum!

As my sister Clarijalke had problems with her computer and printer, I used my free travel 65+ to go to Amsterdam and solve the problems. First off to CoolBlue with a set of 63/302 cartridges, which not matched with her wifi printer HP4525. The CoolBlue people acknowledged, that the delivery should have been 302/302 cartridges. Having bought that set, we went one floor below to choose a new laptop.  The model was not on stock and will be delivered next Monday.

At home I called HP office abought the wrong delivery. CoolBlue had instructed us NOT to open the new bought cartridges before having spoken to HP. With a lot of efforts I got the following explanation: 63/302 were a new XL version of the 302/302 ones. As only the black cartridge printed a testpage, they promised to send a new colour 63/302.

After that there was a lot of free time left, as there was  no computer to be installed. So my sister proposed to take a stroll in unknown parts of Amsterdam. We went to a former animal shelter annex animal graveyard, presently a beer brewery “Cats and Dogs”.

And I know she is very good in it. As there was a huge rainstorm passing over, we went back by bus and had dinner at the Italian restaurant Libero.

Memory, a short play (two person) featuring David Belrose and Gloria Dowton. Part of ten plays presented at the annual 10 x 10 showcase Magnus Theatre in Thunder Bay. Three performances of the plays over two days April 12 & 13 2019. Story revolves around a long married couple and the humour and drama in issues with regards to remembering things.

Photo by courtesy of Marty Mascarin.

David Belrose is the partner of Brian Holden. I know them since 1999. They were the first house guests we had when we moved to Nijmegen, back in September 2003. Pierre moved Friday 12, I moved Monday 15, and Brian and David were picked up at Amsterdam Airport Wednesday 17. Apart from visiting Dutch highlights, we had a house in Bruges (Belgium). From Belgium the two Canadians visited Paris, and returned to Nijmegen.

Friday, 01 March 2019: birthday dinner at Ristorante Italiano “Libero”, with our neighbors Peter and Marie from Nijmegen, my sisters Clarijalke and Ninouchka Barkhuis from Amsterdam, my friend Bart de Boer from Amsterdam, Pierre and yours truly.

High scores on culture and environment shouldn’t come as a surprise with Amsterdam. The city of canals, barges, flowers and free-thinking is a perennial favorite when it comes to living and visiting. There are enough museums, from Anne Frank to Van Gough, from the Rijksmuseum to Rembrandt’s house, the Science Centre to the Museum of Bags and Purses for you to never see the light of day, but that would be a shame. Mix it up and enjoy a trip on the canals in a brunch boat, shop at the Albert Cuyp Market and the flower market. But most importantly, hire a bike and do as the locals do: go and explore the parks, along the canals, and outside of Amsterdam in this, probably the flattest country in the world.

by intercity train from Nimwegen  CS to Amsterdam Amstel station

visiting my sister; by tramway to Amsterdam CS

by Thalys to Schiphol-Rotterdam-Antwerp-Brussels South station

by Thalys to Antwerp-Rotterdam-Schiphol-Amsterdam CS

by intercity train from Amsterdam CS to Nimwegen CS.