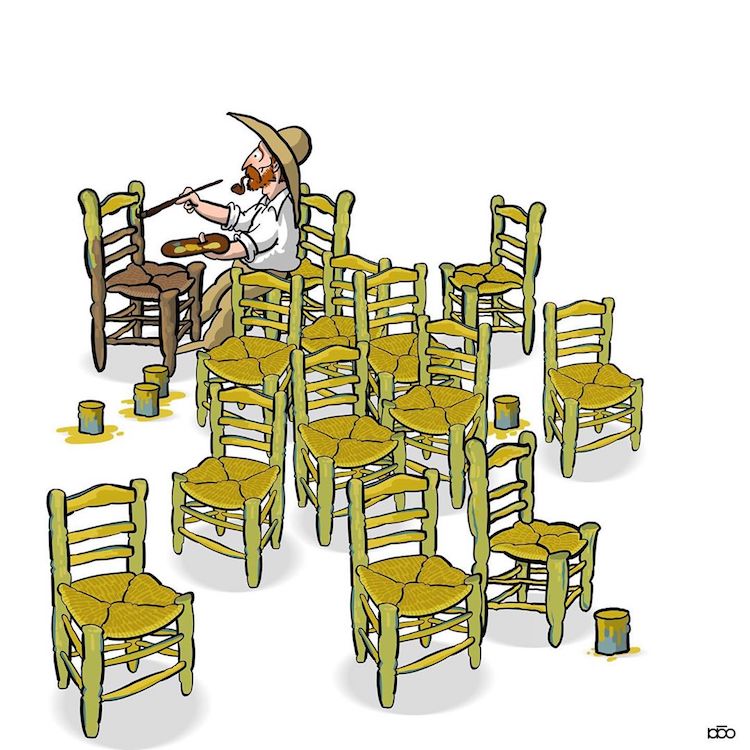 Iranian cartoonist Alireza Karimi Moghaddam shares his admiration for Vincent van Gogh in an ongoing comic series starring the Post-Impressionist painter. His colorful illustrations tell the story of the iconic artist’s turbulent life and the artwork he produced during his short career. From cycling through a meadow of sunflowers and laying in wheat fields to paddling in the ocean and observing the night sky, Moghaddam often illustrates Van Gogh exploring the nature that inspired some of his most famous works. In one image, cartoon Van Gogh looks up at the swirling night sky, which Moghaddam illustrates as stylized, painterly brushstrokes of color. This references one of the artist’s most iconic works, The Starry Night (1889), which visualizes the view from the “iron-barred window” of his asylum room at Saint-Rémy-de-Provence, just before sunrise. Digitally rendered in colorful line work, Moghaddam’s comics are aesthetically cheery, but that doesn’t mean the talented cartoonist shies away from portraying Van Gogh’s darker side. Many images illustrate the troubled artist’s battle with mental health. One comic shows Van Gogh feeding his cut-off ear to crows, and another depicts him standing atop of a bridge, contemplating suicide. No matter the situation, each illustrated scene gives a true representation of the iconic artist’s life in Moghaddam’s distinct, animated style. Scroll down to see some of Moghaddam’s comics starting Van Gogh.

The article was sent to me by Mr. Brian Holden, artist/painter, Thunder Bay, Ontario, Canada.