Famous friends rally to support Duke and Duchess of Sussex: ‘All they’re trying to do is make the world better’ 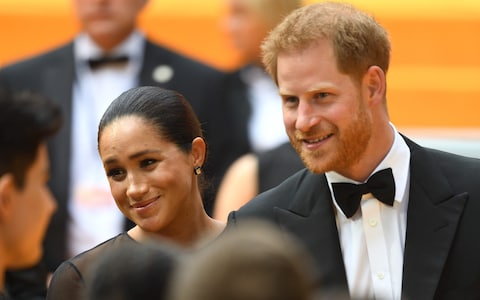 Famous friends of the Duke and Duchess of Sussex have rallied to their defence following accusations of hypocrisy over their use of private jets, saying the couple are just “trying to make the world better”. American talk show host Ellen Degeneres, who has recently visited the Duke and Duchess, and pop star Pink both issued statements lamenting the “public form of bullying” endured by the couple, after details of their holidays to Ibiza and Nice emerged. It is the latest of the high-profile support for the Duke and Duchess, whose circle of celebrity friends are increasingly using interviews and social media to act as unofficial spokespeople to protect the couple from what they view as “attacks”. On Monday, Sir Elton John claimed the Duke and Duchess had been subject to “relentless and untrue assassinations” after being photographed with their baby son Archie Mountbatten-Windsor boarding a private jet to his home in the south of France. The images led to accusations of hypocrisy for the Duke, who weeks earlier had flown to Google Camp to deliver a lecture on the environment and published an interview warning of climate change: “We are the frog in the water and it’s already been brought to the boil”.

He and the Duchess are reported to have undertaken at least four flights by private jet on holidays to Ibiza and Nice this month. Sir Elton said he had arranged the latest trip because the Sussexes needed the “safety and tranquility” offered by his villa on the French Riviera, and had made “an appropriate contribution” to a company that specialises in offsetting carbon emissions. Now, Ellen DeGeneres, a comedian and talkshow host who has worked with the Duke on elephant conservation, added to the A-list voices defending the couple. In a post on Instagram, mentioning her wife, she said: “Portia and I met Prince Harry and Meghan in England to talk about their work on wildlife conservation. “They were the most down-to-earth, compassionate people.  “Imagine being attacked for everything you do, when all you’re trying to do is make the world better.” Pink, an American singer whose links to the Royal couple have not been made public, said: “I’m happy to see people coming to the defense of The Duke and Duchess of Sussex.

“The way people treat her is the most public form of bullying I have seen in a while. It’s out of control. Let’s all be a bit kinder, huh? “Let’s show our children that it’s cool to be kind.” Between them, the three celebrities have a Twitter following of 111 million, with a further 83m people watching on Instagram. DeGeneres’ following alone, of 78.3m on Twitter and 76m on Instagram, dwarfs both the Royal Family’s main official social media accounts – 4m on Twitter – or the SussexRoyal Instagram page at 9.3m. The wisdom of Sir Elton’s intervention has been questioned after it sent the story of the private jet global, elevating it to a spectrum of British newspaper front pages, television and radio. Some were left concerned that the support of multi-millionaire celebrities would not win over the couple’s critics, adding to the confusion over their difficult dual role as global stars and working members of a Royal Family whose activities are funded in part by the taxpayer.

The celebrity PR blitz is understood to have unfolded without the knowledge of staff in the royal household, and is not part of an official communications strategy. It will likely be welcomed by the Duke and Duchess, who have become frustrated at their recent portrayal in the media and the restrictions placed upon them as members of the Royal Family. While the couple have a communications team based at Buckingham Palace, aides are bound to issue factual statements rather than speak on record about the Sussexes more abstract personal attributes or good intentions. Instead, the Duke and Duchess have increasingly forged their own methods of communication, writing lengthy Instagram captions giving away “behind the scenes” information about who they have met and publishing personal photographs.

The Duchess’s recent project to guest edit British Vogue gave her a platform of hundreds of pages to share her world view unencumbered by outside scrutiny. The Sussexes have previously received the support of George Clooney,the actor, who claimed the then-pregnant Duchess had been “pursued and vilified” during her New York baby shower, and said of media coverage: “It seemed to me to be a little unjust since she hadn’t done anything except just happen to live her life.” Gayle King, a broadcaster and best friend of Oprah Winfrey who attended the Duchess’ baby shower and visited her at Frogmore, regularly speaks up for her on American television. The BBC’s fact-checking team have calculated that the Duke and Duchess’s two return flights by private jet would have created 37.6 tonnes of CO2: “more than six times an average Briton’s yearly emissions, or 111 times those of a person in Lesotho”.