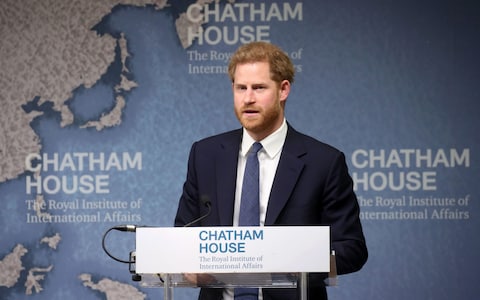 The Duke of Sussex has urged the public not to forget his mother’s words on landmines, as he argues the remnants of war must finally be cleared from Angola to allow wildlife and tourists to return. The Duke, whose mother Diana, Princess of Wales, became the face of the campaign in her lifetime, echoed her words to say landmines “are a humanitarian issue not a political one”, urging countries not to leave the mission “half done”.

Saying it was “pretty shocking” to learn that de-mining funding had been cut by nearly 90 per cent in the last decade, he urged the international community to help Angola complete its “long journey, full of heartache and frustration” to safety. In a speech at a Chatham House Africa Programme event, London, he made the case particularly for the wildlife of the Okavango Delta, where animals too have been armed by the “remnants of war” including landmines. “My hope is that through this collaboration, minefields can be cleared, land can be protected,  wildlife can be free to return to where they once roamed, and Angolans can reap the rewards by coexisting with the one constant that will draw people in from all over the world –  the extraordinary setting that they call home,” he said. The Duke is understood to be planning a trip to the country in the autumn, working with the HALO Trust on the issue of landmines. His visit, which will likely see him accompanied in some capacity by the Duchess and his son Archie, will be a major tourism coup for the region, showing potential holidaymakers that the land is safe in echoes of his mother’s  famous walk through the minefield. “This event is the culmination of a great effort by many people to progress the vital mission of de-mining Angola – and putting it back on the map as a tourist destination,” he said of the Chatham House event. He went on to reference the words of Diana, Princess of Wales, in 1997, when she was heavily criticised for her involvement in the issue of landmines and called a “loose cannon” by one British minister. “I’m not a political ﬁgure, nor do I want to be one,” she said then. “But I come with my heart, and I want to bring awareness to people in distress, whether it’s in Angola or any part of the world. The fact is I’m a humanitarian ﬁgure. Always have been and always will be.” Speaking today, the Duke said: “I first visited Chatham House in June 2017 to take part in a scenario planning exercise – some of you in the room today were here with me. “That exercise showed me the importance of landmine clearance within a humanitarian emergency because, let’s not forget, land mines are a humanitarian issue NOT a political one.” Saying countries must not “leave a job left half done”, he added: “In fact I was told just the other day of the positive transformation in Huambo since my mother walked that minefield all those years ago.

“What is less well-known is the impact landmines can have on conservation and wildlife, and therefore the econo-my.” He continued: “Angola is an important example of a country leading the way in clearing the remnants of war to secure a better future for its people and its environment – it has been a long journey, one full of heartache and frustration I’m sure, but now with the optimism and encouragement from your Government Minister, I truly believe that Angola will become a shining example to the rest of the continent.” The event included a major announcement about a new initiative between The HALO Trust and the government of Angola, who are investing $60 million to clear landmines surrounding the Angolan Okavango watershed. Organisers explained that large swathes of south-eastern Angola were ripe for eco-tourism but virtually inaccessible due to landmines, a legacy of the country’s bitter civil war that ended in 2002.

More than one million landmines were planted across the country during the conflict, decimating rural regions and rendering large areas of the country unsafe for both local people and animals including African elephants, lions, cheetahs and hundreds of species of birds. The HALO Trust, which has been working in Angola since 1994, during which time it has destroyed more than 95,000 landmines and cleared 840 minefields, estimates that there is still more than one thousand minefields to be cleared, an area of 121 km2. The new investment, over five years, will fund the clearance of 153 minefields in the south-eastern province of Cuando Cubango inside two national parks, the Mavinga and the Luengue-Luiana.

HALO estimates it will need a further $60 million to clear the rest. The 1997 Landmine Treaty, to which it is a signatory, pledges to clear all landmines by 2025. Jane Cooking, chief executive MAG, another international anti-landmine organisation, who took part in the panel discussion, spoke about Diana’s work. She said: “She was very frustrated that what she was doing was being misconstrued as a political issue, not a humanitarian one. “The point was the landmines treaty remains one of the rare pieces of international law where rather than everybody having to get on board, and you just end up with the lowest common denominator, a group of countries led by Canada said ‘scrap this, we are not going anywhere with this. This is not going to work. Those that are up for it, let’s just do it”. “Princess Diana put her weight behind it. So all this diplomatic effort which had been going on for years, she really helped get it over the line.  “We broke the rules and she broke to rules to do that wonderful thing.”