Prince Harry: Investing in sport for disadvantaged youth would save ‘hundreds of millions of pounds’

The Duke of Sussex has argued investment in grassroots sports would save “hundreds of millions of pounds” in treating the problems of a lost generation of young people, as he joins Anthony Joshua and Nicola Adams in the boxing ring. The Duke, who has previously spoken about how boxing has helped his own mental wellness, said supporting sports projects would not only change lives but save lives. Speaking at the launch of Made By Sport, a charity coalition to raise £40 million to boost sport in disadvantaged communities, he said the country could spend hundreds of millions of pounds on the problems caused by a lack of sport in young people’s lives or “you rip up all those cheques and start at the beginning to prevent it from happening in the first place”. At the event, at the Black Prince Trust’s Community Sports Hub in Kennington, London, the duke stepped into a boxing gym to watch former heavyweight world champion Anthony Joshua coaching youngsters alongside flyweight fighter and double Olympic gold medallist Nicola Adams. He told his audience: “You can always separate the people who have had sport in their lives from a very young age compared to the people that haven’t.” “I don’t have a problem with saying that as set of core values, if you don’t have sport in your life then it will be a very isolated journey. “We have a 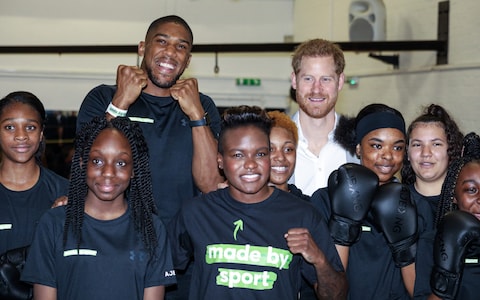 in this campaign to ensure places that are being shut down are not being shut down and that people from all walks of society and every corner of this country are actually given the opportunity to shine, to flourish. “This is about community, this is about providing opportunity to young people all over the place to actually be part of something, something they might not be getting at home, within their own community.” The duke said the sport allowed participants to “get out the anger and aggression which everybody has”, and Joshua added: “All you need is a T-shirt and some gloves.” Adams said afterwards:  “Harry has boxed a bit before. He said he had been boxing before. “I’d love to see boxing gets back into schools more.” “There’s a real bond in boxing. A lot of kids who are drawn to it are trying to get away from a troubled life.” “Boxing is a safe environment where they can do that in a safe environment. Boxing has done the world for me, I’ve travelled the world, I’ve been awarded an MBE and an OBE and become double Olympic champion.

“I think Harry really understands the power of what it can do for kids.”