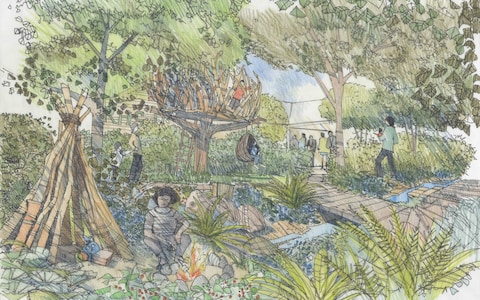 This week, Kensington Palace released previously unseen images of the Duchess of Cambridge putting the finishing touches on her designs for her debut Chelsea Flower Show garden. Over the past few months, Kate has been working with the Royal Horticultural Society and award-winning landscape architects Andrée Davies and Adam White to design a woodland wilderness “Back to Nature” garden for families with children. Until now, the details have been kept under wraps – shrouding the most eagerly anticipated attraction of the 2019 show in mystery ahead of its grand unveiling next week. However, we know that the garden is designed to “inspire families to get outside and explore nature together”, and to promote the benefits the natural world brings to mental and physical well-being. And we can now reveal that among the many child-friendly, playful features, the 37-year-old’s magical garden is set to boast both a stream and Enid Blyton-esque, high-platform tree house, clad in stag horn oak and whimsically reminiscent of a bird’s nest. The pictures here show just how hands-on Kate’s creative input has been into the garden, which will also feature a swing seat, a campfire and a rustic den, similar to one used by her own children Prince George (5), Princess Charlotte (4) and Prince Louis (1) in the grounds of Anmer Hall, their beloved countryside home in remote north Norfolk.

When she and Prince William were based there permanently, they planted extra trees, saplings and shrubs to create a natural retreat from the outside world, and in many ways, this is to be a garden shaped by the Duchess’s own first-hand experiences of the joys of playing outside and escaping into nature. Lift the tree stumps, stepping stones and a hollow logs we now know that she will present next week for children to play on at Chelsea, and you will likely find not just ants, worms and woodlice, but an insight into the Duchess’s family values and the causes that make her tick. The Duchess of Cambridge is understood to have been a “tomboy” as a child, has always spoken fondly about her childhood, saying she used to love spending time outside with her parents Carole and Michael Middleton and her siblings Pippa and James in the village of Bucklebury in Berkshire, where you will find the Bucklebury Farm & Deer Safari Park and the pretty River Pang, a gently tinkling chalk stream. And outdoor playtime is exactly what Kate and Prince William want for their own children, too. “As a mother, it is the simple family moments like playing outside together that I cherish,” she wrote in an open letter to support Children’s Hospice Week. It’s no coincidence that the day care she chose for Prince George in Norfolk was a modest Montessori nursery, Westacre, where the emphasis was on “free play”, often outdoors, getting stuck in and getting messy. 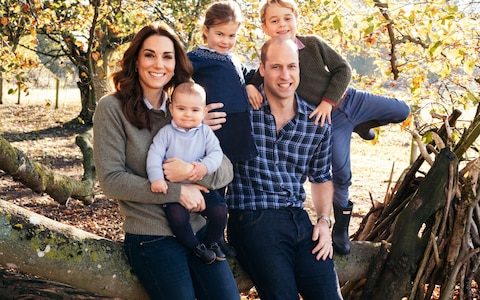 Recently, the Duchess also got stuck into the RHS Campaign for School Gardening, helping a group of children to plant spring-flowering bulbs, including daffodils and snake’s head fritillaries. According to Kensington Palace, Kate’s ‘Back to Nature’ garden “hopes to trigger memories of time spent in nature” – but it’s not only nostalgia for an idyllic childhood driving Kate’s appreciation of the fun to be had in green spaces, but also her ongoing campaigning for mental health awareness. Kate is seen as the driving force behind Heads Together, an ongoing campaign she fronts with her husband Prince William and her brother-in-law Prince Harry, who opened up to The Telegraph’s Bryony Gordon last year about his own battles with mental health issues as part of their #oktosay campaign. Fresh air, exercise and natural surroundings contribute to both mental and physical health, which the young royals believe are of equal importance. The benefits are proven, and the effects can be immediate: one recent study even found that birdsong can boost mental well-being for up to four hours.  This week, Prince William launched a new ‘Head’s Up” men’s mental health campaign at Wembley Stadium with the Football Association president. Both Kate and William have worked continuously to end the stigma around mental health and “open up the conversation” as a whole. Kate’s focus has increasingly been on children’s mental health, in particular. In February, she visited a number of school’s for Children’s Mental Health Week. “Childhood is an incredibly important moment in our lives,”

she said at the time. “It is the time when we explore our personalities, discover the potential that lies within us and learn how to be ourselves. Our experience of the world at this early stage helps to shape who we become as adults, how we begin to feel comfortable in our own skin.” Earlier this month, she also gave a heartfelt speech at the opening of a new children’s mental health centre, the Anna Freud National Centre for Children and Families in King’s Cross.  “We are all here today because we care so much about transforming the mental health of children, young people and their families. I have learnt so much about early childhood development and the importance of support from parents,” she said. In her Chelsea garden, interaction with the natural environment will be encouraged through the garden’s “multi-sensory” green and blue plant scheme to offer serenity away from screens and stress, set within a bosky environment traversed with paths. This in itself is revealing of Kate’s concern over the impact of technology on modern childhoods. Apparently, during early discussions between the landscape designers, it emerged that she had been reading Last Child in the Woods, the 2005 book in which author Richard Louv first coined the phrase “nature deficit disorder” (£10.99, Waterstones).

In the book, Louv attributes such ills as the rises in childhood obesity, attention disorders, and depression to this deficit – but also offers practical solutions, many of which can be found just beyond the doorstep. Since its first publication, Louv has launched a growing “Leave No Child Inside” movement, and has published updated research confirming that direct exposure to nature is essential for the physical and emotional health of children and adults. According to the palace, the Back to Nature garden “seeks to recapture for adults the sense of wonder and magic that they enjoyed as children, in addition to kindling excitement and a passion for nature in future generations.” Like Anmer Hall, her garden will offer rural respite from urban living as well as an antidote to increasingly sedentary, indoor lifestyles. “The challenge we all have is to make it feel like visitors are in the middle of a woodland,” said Adam White of the design, which the Duchess suggested should incorporate elements of forest bathing, the Japanese practise of immersing yourself among trees for wellbeing, otherwise known as shinrin-yoku.

In many ways, Kate is following in the footsteps of her father-in-law Prince Charles in this respect. A passionate gardener who has long campaigned for environmental causes, Charles has also previously exhibited at Chelsea, designing two gardens in 2001 and 2002, and winning silver both times. Notably, he worked with garden designer Jinny Bloom to create a “Healing Garden”, which featured 125 varieties of medicinal herbs, shrubs and kitchen plants to help with everything from bruises to stress. While cynics may see the Duchess’s debut as a cleverly plotted marketing exercise executed by the Firm, surely anything that aims to get us away from computer screens and paddling in streams or climbing trees again for a dose of “nature medicine” can be no bad thing.