After months of speculation about the royal baby’s name – we finally have the answer. The Duke and Duchess’ boy is called Archie Harrison Mountbatten-Windsor. But the newborn will not be given a courtesy title after his parents decided they would like him to be known simply as Archie. The baby will have the title “master” for formal correspondence while a child, instead of being an earl or a lord. The Sussexes could have chosen to give him the title of Earl of Dumbarton, one of the Duke’s subsidiary titles available to his firstborn boy. They could also have opted for Lord Archie Mountbatten-Windsor to ensure gender equality with any future sister. But he will be known as Master Archie Mountbatten-Windsor, as the Duke and Duchess of Sussex take their first steps toward giving the seventh-in-line to the throne the most normal upbringing they can muster. 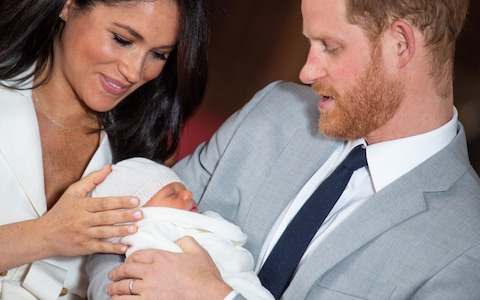 A spokesman for Buckingham Palace said that, while there were titles that Their Royal Highnesses the Duke and Duchess of Sussex could apply to their son, “they have chosen not to give him a courtesy title at this time”. This could be revisited when the Prince of Wales one day becomes king, under a 1917 convention allowing the grandchildren of the monarch to be known as HRH Prince or Princess. He will also be entitled to succeed Prince Harry as the Duke of Sussex. The Duke and Duchess’s decision is understood to be their own, with the Queen happy to allow them free choice over their children’s names. The Duke has previously spoken frankly about the difficulties he experienced while growing up as a member of the Royal family, with the title carrying responsibility as well as rights.

In 2015, he disclosed he had once felt so disillusioned he “wanted out”, considering giving up his title before conceding he could use it for good. Being in the Army as Captain Wales or simply “Harry”, he has said, was the “best escape I’ve ever had”. He has since appeared to embrace the benefits of his royal platform, using his position to further an array of charitable causes on the world stage. The Sussexes’ decision also reflects the choice made by Prince Harry’s aunt, the Princess Royal, whose children were known from birth as Peter and Zara Phillips. Zara, now Mrs Tindall, has embraced the freedom, which has required her and her brother to forge their own professional paths and enabled her to earn a living via sponsorship as a sportswoman. “I’ve been very lucky,” she has said in an interview. “My parents didn’t give us titles so we’ve been able to have a slightly more normal upbringing. “As soon as you’ve got a title, it’s difficult to shed it. My brother and I have been very lucky like that, being able to find our own way.”

As Archie Mountbatten-Windsor, Baby Sussex is free to do the same, joining his parents on the global platform they have cultivated. By actively announcing the decision to eschew all titles, the Duke and Duchess have also neatly avoided the inevitable comparisons with the Cambridge children, who were all named HRH Prince or Princess at birth. Some had feared the Earl of Dumbarton title would prove confusing for fans of the Sussexes around the world, who could perceive it as a snub owing to the disparity in rank. While unlikely to have been a primary consideration for the couple, the lack of a traditional British title will also serve to simplify matters for the American media which already persists in referring to “Duchess Meghan” and may have used “Earl Archie” for ease. The Duke of Edinburgh, who met Archie at Windsor Castle on Wednesday, may have been pleased to learn that he is taking the surname Mountbatten-Windsor after he famously insisted his descendants bear the family name. He joins Lady Louise Mountbatten-Windsor, the daughter of the Earl and Countess of Wessex, in the style. Penny Junor, a royal biographer, said: “It’s exactly what I would have expected from Harry. He would have dearly liked to have been a normal boy growing up and found his title very difficult.”