Teacher Jade Groves explained that it was when the children practiced their balance by standing on one leg with a plastic disc on their head. “Do you guys want to show him?” she asked the children, as Prince Harry gamely joined in on one leg for a pose onlookers likened to the yoga move “tree pose”.

“You wobbled,” one child pointed out.

The Duke, who introduced himself to the children’s parents, crouched down to chat to three-month-old daughter baby Naz, just a few weeks ahead of the birth of his first child. Maria Ahmad, the baby girl’s mother, said: “He was so excited and happy about the baby. “He was asking about her sleeping. I think he’s worried about that – if the baby sleeps at night time.” 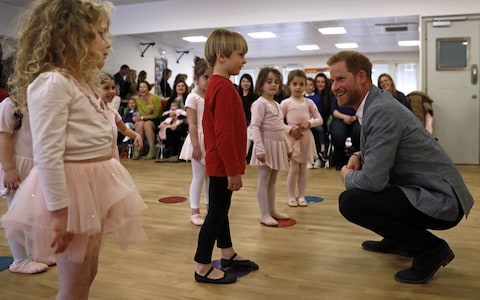 The Duke also spoke of the necessity of charities telling their success stories, giving others inspiration that their lives can improve. “Most of the people I’ve met who’ve been through a really dark place, 99 per cent of them have come through it and found mechanisms to carry on with their normal life or have made serious adjustments in their life to be able to cope,” he said. “You, as charities, I don’t believe necessarily put those people forward. Those are the icons, the people that young people need to see and hear their stories.