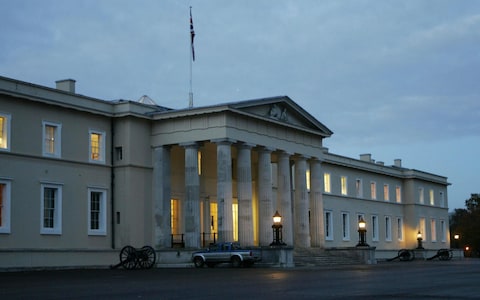 Sandhurst cadets have been charged with battery against a trainee army officer after prosecutors investigated reports of waterboarding. The Royal Military Police (RMP) launched an investigation after the alleged incident on August 7, 2018, at the famous Royal Military Academy in Camberley, Surrey. The Service Prosecution Authority today charged the two cadets, who will appear at Bulford Military Court near Salisbury, Wilts on Feb 26. They were alleged at the time to have pinned down the victim before pouring water over a cloth covering his face, in an act that was said to induce the feeling of drowning, but have instead been handed a lesser charge of battery. The Telegraph understands that the incident did not take place during training. The cadets involved are understood to be in the same all-male platoon and no instructors were involved. The three cadets involved were moved on to different platoons as the allegations were investigated. An Army spokesman

said: “Following an RMP investigation two service personnel have been charged with battery in relation to an incident at the Royal Military Academy Sandhurst. This case is now with the Service Prosecuting Authority”. Speaking at the time of the alleged incident Brigadier Bill Wright, Deputy Commander  of the Royal Military Academy, said: “The Army and I expect the highest standards of behaviour at Sandhurst; anyone found to have fallen short is dealt with robustly, including dismissal, if appropriate.” All British Army officers are trained at the Royal Military Academy Sandhust on a year-long commissioning course. Both the Duke of Cambridge and Duke of Sussex are former graduates, with saying that although he felt he had been “treated like dirt”, he had enjoyed the experience.