The Duke and Duchess of Sussex have arrived in a snow covered Bristol for a day of royal engagements which will begin with the couple meeting the public in the heart of the city.

The royal couple will also tour the Bristol Old Vic theatre and travel to the Empire Fighting Chance, a charity using boxing to support children failing at school. There were fears the visit may be called off because of the Arctic conditions, but organisers of the couple’s first engagement – a visit to the Old Vic, which is undergoing a multimillion-pound restoration – said they were still expecting the duke and duchess. A Bristol Old Vic spokeswoman said: “We are still going ahead so far, there have been no messages to say otherwise.” The Duke and Duchess will be taken on a guided tour of the revamped theatre, which has been entertaining audiences for more than 250 years. During the day the couple will also meet well-wishers on a walkabout and travel to Empire Fighting Chance, a charity using boxing to support children failing at school and in danger of drifting into a life of unemployment or even crime. The Bristol Old Vic was built in 1766 and has a unique place in British theatre history, having nurtured the talents of countless famous actors from Daniel Day-Lewis and Greta Scacchi to Peter O’Toole and Jeremy Irons. Stirling Prize-winning architects Haworth Tompkins led the theatre’s redesign, which 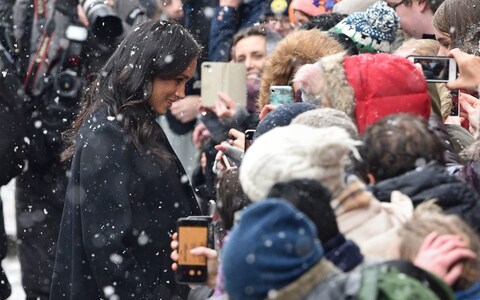 a full-height timber and glass-fronted foyer that reveals the original audito-rium facade to the street for the first time. The internal layout has been trans-formed, with the restoration of the Georgian Coopers’ Hall, a new studio theatre created in the old barrel vaults and mezzanine galleries. The project is the second stage of a 10-year, £26 million programme to completely overhaul and safeguard the future of the theatre. During the visit, the duke and duchess will drop in on a workshop attended by local schoolchildren, which is part of Bristol Old Vic’s outreach .