The Queen’s children have shouldered the greatest burden of Royal duties this year, analysis of palace statistics has shown, as three generations of working royals settle in to their new responsibilities. The Prince of Wales, Duke of York, Earl of Wessex and Princess Royal have undertaken official duties on a combined 675 days in 2018, significantly more than the younger generation. Analysis of the Court Circular, the official list of royal engagements which are published in the Telegraph, shows that Princess Anne worked more than 180 separate days making her the hardest working royal, followed by her siblings. The Duke of Cambridge is recorded on at least 120 days, while the Duke of Sussex is down for just over 90. Both are understood to have done around 20 per cent more engagements than they did last year. While the Duchesses of Cambridge and Sussex provided much of the public face of the Royal Family thanks to global press interest, their total recorded working days were 100, compared with the total 218 carried out by their husbands. The analysis of how the Royal Family is dividing its work is particularly striking thanks to the addition of the Duchess of Sussex to “Team Windsor”, with the Queen now having two full generations of 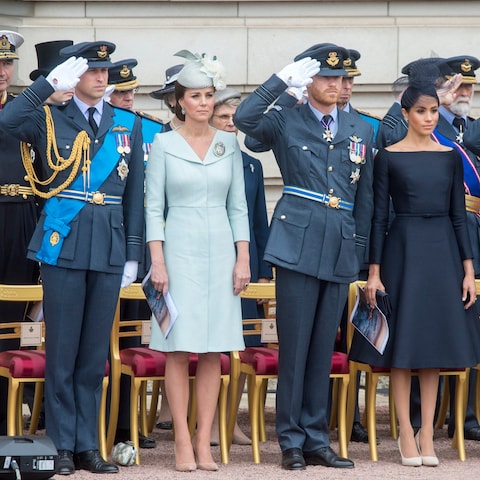 adults – her children and grandchildren and their partners – to help her. While the four siblings of Princes Charles, Edward and Andrew and Princess Anne still do many of the “traditional” duties, from plaque unveiling to community lunches and charity visits, the younger royals have tended to swap that quantity for fewer, more involved projects on key topics such as mental health, sport or support for Grenfell Tower survivors. The Duchess of Cambridge’s duties were obviously reduced following the birth of Prince Louis in April, taking maternity leave until September. Despite attending several events with Prince Harry ahead of her wedding, the Duchess of Sussex was added the Court Circular in May. Next year, the on-record work of both Duchesses is likely to increase significantly, with Catherine focusing on child development, and Meghan’s private meetings translating into a much-anticipated announcement of her patronages. The Earl of Wessex, Prince Edward, who did at least 170 days of royal work having taken on his father’s role overseeing the Duke of Edinburgh’s Award scheme. He also regularly attending events at the University of Bath where he is Chancellor, opens business and supports British sporting initiatives. The Prince of Wales performed more than 160 days of duties, increasingly stepping in to perform investitures and receive overseas visitors in support of the Queen. He is well known for working privately every day – Prince Harry recently said of his father: “The man never stops.” The Duke of York worked more than 140 days, often promoting British businesses at events abroad – he was in Australia and Vietnam this year – and receiving dignitaries in London. However, the Queen carried out more than 120 days of duties, meeting heads of state, including President Trump, visiting charities and welcoming dignitaries to the UK. The Duke of Edinburgh, who is now retired at the age of 97, kept his hand in with six recorded official engagements in 2018, most notably his grandson’s summer wedding, as well as meeting senior military personnel. While key events of the Royal year have been personal, it has also seen new work commitments. The Duke of Cambridge made a landmark visit to Israel and the Occupied Palestinian Territories, the Sussexes began their work in the Commonwealth with a successful tour of Australia, Fiji, Tonga and New Zealand, and the Prince of Wales used a tour of the Gambia, Ghana and Nigeria to further his case for the environment and acknowledge Britain’s role in the slave trade. While the analysis of Court Circular reports shows roughly how many days each member of the Royal Family attended an official engagement, it does not reflect the number of separate engagements they had in that day. It also does not measure the wider public impact of each day’s work or the extent of arrangements to prepare for them, with some appearances from the Cambridges and Sussexes requiring heavier security and planning due to the crowds attending. The Royal Family will finish their working year at Sandringham for Christmas this week. The four young in-laws will join the extended family on their annual public walk to St Mary Magdalene Church, where they were last year photographed together for the first time.