The silencing of Big Ben’s bongs caused protests in the streets and now the the original maker of its bells has found itself at the centre of another ding dong. A battle has commenced to stop the struggling home of the famous clock’s bells, the Whitechapel Bell Foundry, from turning into a luxury hotel. The UK Historical Preservation Trust, originally founded by Prince Charles, is fighting its owner, a US investor who helped fund Soho House for council approval to transform the business to fit the modern age. The Whitechapel Bell Foundry has been operating since the 1740s, having made some of the most famous bells in the world including the Liberty Bell in Philadelphia, bells in Westminster Abbey and Big Ben. But despite its extraordinarily long history the fourth-generation bell-founder Alan Hughes and his wife Kathryn decided to sell the site last year. 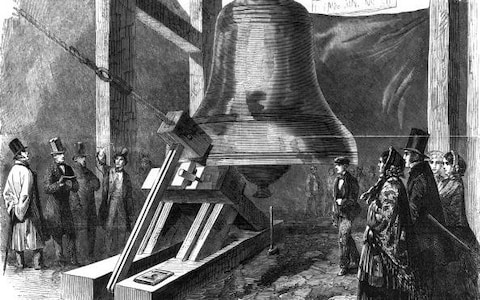 The decision was due to financial pressures as the industry is in decline, Mr Hughes told the FT, as orders had dried up so badly in late 2016 that “we literally couldn’t pay the wages”, he said. Now the UK Historical Preservation Trust has teamed up with Factum Arte, a high tech art business, to fight to stop the site’s owner, US investor Raycliff, building a hotel at rear of the building while restoring the most vital parts of the grade II listed structure as a public attraction. Its owner, Bippy Siegal, is investing in a plan to preserve the parts of the building with historic value as well as building a 95-room hotel, with a shop selling hand bells produced by Kathryn Hughes. The design also features a grand public café which would aso be bell themed, with bell-making equipment on the walls. Customers would be able to sit and admire a three metre deep glass-covered bell pit, in which the Liberty Bell was cast. Factum Arte produces sculptures and uses cutting edge digital scanning and 3D-printing techniques to create art and replicate ancient artifacts. It is most well known for making a copy of the burial chamber of Egyptian pharoah Tutankhamun, which is now installed at the Valley of the Kings. It wants to turn the building into a high-tech art business and historical site which aims to maintain the foundry as a functioning business. Factum has partnered with the UK Historic Building Preservation Trust in a bid to turn its vision into a reality. It has already proved how it can turn a struggling historic business into a thriving tourist attraction through its involvement in the £9m regeneration of Middleport Pottery, a historic industrial site in Stoke-on-Trent. The business was on its knees but was revived by the scheme, which will serve as inspiration for the Whitechapel Bell Foundry revivial, according to a trustee of the charity. According to British cultural historian Saumarez Smith, the revival of the site’s bell making facillities is absolutely crucial to retailing its full historic value. “My view is that the historical fabric of the building is meaningless without its use,” he told the FT. “As an 18th-century building it’s not of architectural significance. What’s important is its role as an example of industrial heritage.” The Factum Arte faces a major spanner in the works, however. It does not own the building and its owner has its own plans in motion, meaning it does not wish to sell. Its success is now riding on the local council siding with its view that maintaining the site’s historical value is most important for its future. It also provides creative education and training, which is thought to be likely to appeal to the council. Bell-making could be up and running within a year, once emergency repairs to the roof have been carried out. But as the battle between corporate investor and charity-backed artist continues, Mr Hughes is concerned that the £7.9m site, which requires rennovation, will be left to further deteriorate.