Duke and Duchess of Sussex consider major US tour next year

The Duke and Duchess of Sussex could make their first visit to America as early as next year, as aides consider a Royal stop-off at Meghan Markle’s former home. The couple, who will undergo their first major tour to Australia, New Zealand, Tonga and Fiji this autumn, are understood to be working towards a trip across the Atlantic next year. While no plans have yet been finalised, with staff concentrating on the South Pacific tour before any details of an American trip can be discussed, sources said it had been pencilled in for 2019. The Duke has visited America before, including trips for his Invictus Games in Florida, holidays and an official tour in 2013. The Duchess was born in California, living in the US until she moved to Toronto, Canada, to work on the Netflix legal drama Suits. Her mother Doria still lives there, with her father Thomas, who missed her wedding and has undertaken a string of unflattering interviews about her, based across the border in Mexico. The 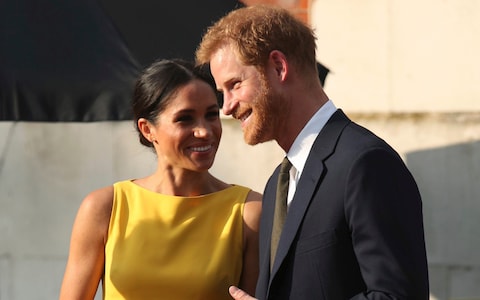 trip, which like all Royal tours would be organised by the Foreign and Commonwealth Office, would leave the Duke and Duchess facing questions over whether they would meet President Trump and the First Lady. They did not spend time with the American couple during their non-State visit to the UK this month, with the Duchess previously calling the president “divisive” and “misogynistic”. The Duke has a famously friendly relationship with Barack and Michelle Obama, and has been photographed with them on several occasions. A trip to America would likely see the Sussexes attempt to avoid politics altogether, focusing instead on favourite causes including young people, sports, technology and military veterans. The couple are likely to spend time in New York, Washington DC and California, US Weekly magazine reported, quoting a source saying: “They are so excited…Meghan is looking forward to introducing Harry to everything she loves about the U.S.” The US is understood to be one of several destinations being considered by the Foreign and Commonwealth Office for 2019 tours, with plans for Royal visits often changing at the last minute. If a trip to the US were to go ahead, it would likely be aimed at further securing the “special relationship” with a Royal charm offensive and a show of so-called “soft power”. The Duke and Duchess of Cambridge made a short visit to America in 2011, tied into a long Commonwealth tour to Canada when they were newlyweds.