Duke and Duchess of Sussex join the Queen at Royal Ascot

The Duchess of Sussex has made her debut at Royal Ascot, joining the Queen for her favourite event of the season as she channeled the monochrome style of My Fair Lady. The Duchess, in a white and black hat and dress, accompanied her husband in an Ascot carriage for her first outing to the Royal Enclosure, before presenting a trophy to race winner Frankie Dettori. While she appeared to have taken style inspiration from the 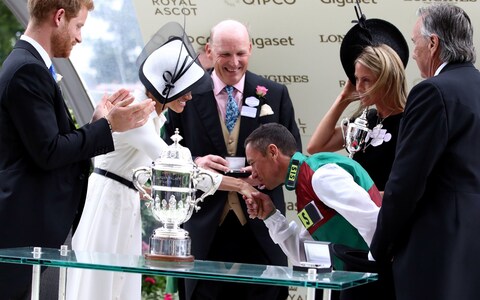 outfits of Audrey Hepburn’s Eliza Doolittle, she suffered no similar etiquette mishaps, mingling with seasoned race-goers and engaged in cheerful conversation with the Queen. The Queen, in bright yellow, led her family in the opening day of Royal Ascot, joined by the Prince of Wales, Duchess of Cornwall, Princess Royal and Duke of York with his daughters. The Duke of Cambridge was elsewhere, undertaking engagements focusing on male mental health and technological innovation in Liverpool, while the Duchess remained out of sight with her three children. The Duke and Duchess of Sussex arrived in the third carriage of the tradition Royal procession, along with the Earl and Countess of Wessex. They would have had much to talk about, as the newlywed Sussexes celebrated the “one month anniversary” of their wedding and the Wessexes marked 19 years to the day since their own Windsor Castle nuptials. In an unmistakable sign of 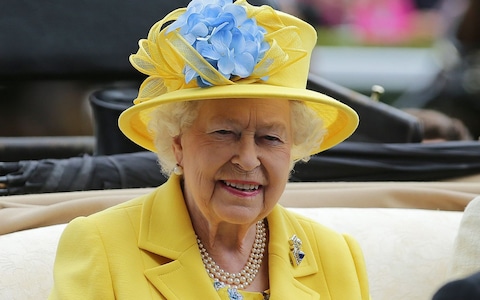 welcome into the Royal family, the Duke and Duchess were tasked with presenting the trophy for the St James’s Palace Stakes, won by Favourite Without Parole ridden by Frankie Dettori and trained by John Gosden. The Duchess of Sussex wore an embellished white shirt dress from Givenchy, the fashion house that designed her wedding gown, with a striking hat by Royal favourite Philip Treacy. Fitting in with the strict dress code of the Royal Enclosure, the Duchess’ colour scheme was reminiscent of the 1964 My Fair Lady film, in which a beautiful cockney flower seller mingles with high society at Ascot before being unmasked by her coarse shouts of encouragement at the horses.