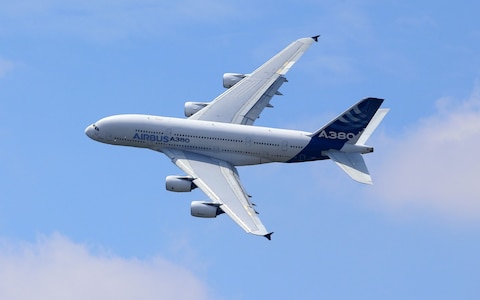 Airbus has been accused of reigniting “Project Fear” for political reasons after the European planemaker threatened to pull out of the UK in the event of a “no deal” Brexit. The aerospace giant, which employs 14,000 people at 25 sites across the country, said it would “reconsider its investments in the UK, and its long-term footprint in the country” if Britain crashed out of the single market and customs union without a lengthy transition agreement. But Brexiteers said you “couldn’t have a more politically motivated threat than this” and suggested Airbus was seeking to pressure the Government into staying as close as possible to the EU in order to protect its own “narrow, vested

interests”. Airbus set out its stance in a “risk assessment” published on its website in which it also called on the Government to extend the Brexit transition period which is currently due to run until December 2020 if a deal is agreed. It said the proposed transition was too short for the business to reorganise its supply chain and that if there was no extension it would “carefully monitor any new investments in the UK and refrain from extending the UK suppliers/partners base”. But Peter Bone, the leading Tory Brexiteer, said: “It is just another part of Project Fear. I have given up counting how many times people have said it will be the end of the world. They are not going to pull out. “They are just trying to put pressure on the British Government because they want us to continue to be a part of the European Union. You couldn’t have a more politically motivated threat than this and I don’t believe for one minute that Airbus would move from the UK.” Nigel Farage, former Ukip leader, said it was “hardly surprising Airbus are threatening us today when they’ve taken billions in EU funding” as he also questioned whether the company would pull out of the UK. He told Sky News: “Twenty years ago I heard car manufacturers saying if Britain didn’t join the euro they may well consider pulling out of Britain – Nissan, others like that. “We build the wings in this country. If they close down production it would take them at least two years to put that back in place somewhere in France or Germany. “Big business will always lobby for their interests, of course they will. I understand that.” Meanwhile, John Longworth, the co-chairman of the Leave Means Leave campaign group, said: “The latest scare story from Airbus screams of more Project Fear. “The French-run Airbus is a classic multi-national business that clearly doesn’t care about the UK as we embark on a new post-Brexit future, because it is intrinsically wrapped up in the EU and trying to undermine the UK Government’s negotiating position.” Tom Williams, the chief operating officer of Airbus Commercial Aircraft, told BBC Radio 4’s

Today programme the firm was “becoming increasingly frustrated with the lack of clarity” over Brexit and “obviously time is running”. He said: “Now we have to come to the point where we have to make serious decisions. Quite often those decisions are long-term in nature and without clarity it’s too dangerous for us to proceed. “We’re talking about decisions in terms of safety stocks, buffer stocks of components, assuming that there will be chaos at the borders and that material won’t be moving freely. “We are talking about ‘do we invest in further capacity?’ And we are also talking about what will happen to components from suppliers to us and to airline customers, which today are certified under IATA rules and at the end of March next year those certifications will be invalid. Those components won’t be able to be fitted in aeroplanes.” Asked how soon decisions would have to be taken, Mr Williams said: “As we go through this summer, over the next weeks, we need to get clarity. We are already beginning to press the button on crisis actions. “The challenge of this is not a one-off decision. It will be a series of significant decisions that will accumulate as we go over the next couple of months.” He added: “When we look at the next generation of wings – which is called Wing of the Future – we are working on that today in the UK. Clearly now we are seriously considering whether we should continue that development or find alternative solutions.” Mr Williams insisted no political pressure had been put on Airbus to speak out. “I’m an engineer, not a politician,” he said. “I have to deal in certainty. We can’t continue with the current vacuum in terms of clarity.” The Airbus row comes after Philip Hammond, the Chancellor, warned the EU against an “ambition to force the location of business into the EU”.