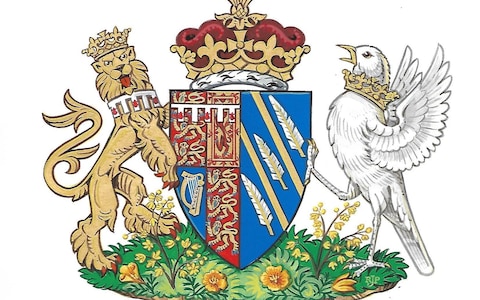 The Duchess of Sussex has been granted her own coat of arms by the Queen, as she chooses the blue skies of California and a songbird emblem of communication to represent her in married life. The Duchess, who helped to design the image, holds the coat of arms in her own right with no input from her father, who as an American does not have his own coat of arms. Instead, she has chosen her own symbols, with a white songbird as her “supporter” to stand opposite the lion representing her husband and his family. Just as her presence brought American emblems to the vellum of the Instrument of Consent before her marriage, the coat of arms is infused with transatlantic symbols. The Duke is represented with his own coat of arms on the left-hand side, granted on his 18th birthday, which includes both his Royal family lineage and the small, red escallops of his mother’s family. The decision to grant the Duchess a coat of arms in her own right follows a model set by the Duchess of Gloucester when she married into the Royal Family in 1972 after being born in Denmark. More usually, the coat of arms belonging to a Royal bride impale the emblem of her own family with that of her husband to form a new image. 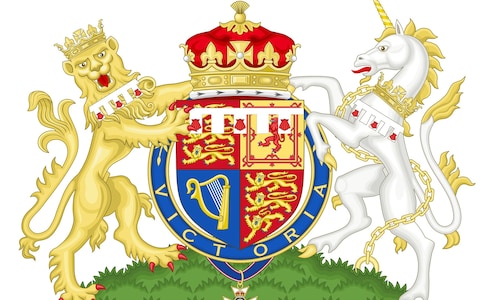 In 2011, the Middleton family was granted its own coat of arms before Catherine Middleton married Prince William, incorporating the three acorns of the Middleton children with a golden chevron representing her mother’s maiden name of Goldsmith.  A spokesman for Kensington Palace said the Duchess of Sussex’s coat of arms was “both personal and representative”, and had involved the newlywed working closely with experts at the College of Arms over its design. The choice of symbols suggests both the Duchess’s pride in her American roots and her hope to continue to speak freely within the parameters of her new royal life. ​“The blue background of the shield represents the Pacific Ocean off the California coast, while the two golden rays across the shield are symbolic of the sunshine of The Duchess’s home state,” the spokesman said. “The three quills represent communication and the power of words. “Beneath the shield on the grass sits a collection of golden poppies, California’s state flower, and wintersweet, which grows at Kensington Palace.” While most royal brides have two “supporters of the shield” represented on their coats of arms, one from their husband and one relating to themselves, the Duchess has a “songbird with wings elevated as if flying and an open beak, which with the quill represents the power of communication”.

A coronet has also been assigned, composed of two crosses patée, four fleurs-de-lys and two strawberry leaves. The design of the Duchess’ arms was agreed and approved by the Queen and Thomas Woodcock, Garter King of Arms and Senior Herald in England, who is based at the College of Arms in London. Mr Woodcock said: “The Duchess of Sussex took a great interest in the design. Good heraldic design is nearly always simple and the Arms of The Duchess of Sussex stand well beside the historic beauty of the quartered British Royal Arms. “Heraldry as a means of identification has flourished in Europe for almost nine hundred years and is associated with both individual people and great corporate bodies such as Cities, Universities and for instance the Livery Companies in the City of London. “

The Markle family has previously complained bitterly of a “snub” after Thomas Markle, the Duchess’s father who was unable to attend her wedding, was not given his own coat of arms. Samantha Grant, the Duchess’s estranged half sister, declared it “really stripping him of an honor”, delivering a “huge insult”. In fact, Mr Markle’s American citizenship meant that he could only be granted an honorary coat of arms, had he applied for one and been able to prove descent from a subject of the British Crown. Even then, a source suggested, it could not have been used by the Duchess by virtue of being honorary.