What time is the Royal Wedding? Full schedule and timings of Harry and Meghan’s big day

The wedding of Prince Harry and Meghan Markle is almost here, which means the final preparations for the big day will no doubt be being tweaked and polished as you read. The ceremony, which takes place on May 19, will be held in Windsor and includes two wedding receptions and a carriage procession as well as the service. Prince Harry and Ms Markle have broken tradition by choosing to hold their wedding on a Saturday, as royal weddings usually take place during the week. The wedding of the Duke and Duchess of Cambridge was held on a Friday and the wedding of the Prince of Wales and Diana, Princess of Wales was held on a Wednesday; on both occasions the public were given an extra bank holiday. While Downing Street have said there are no plans to give Britons a day off for this year’s royal nuptials, pubs and bars will be allowed to stay open until 1am on Friday May 18 and the day of the wedding itself. Amber Rudd, the former Home Secretary, opened a consultation on the plans in January. She said: “The Royal wedding will be a time of national celebration, and we want everyone to be able to make the most of such an historic occasion. “I hope that this relaxation of the licensing hours will allow people to extend their festivities and come together to mark what will be a very special moment for the country.” Here is everything you need to know about how the big day will unfold.

The service will take place at St George’s Chapel in the grounds of Windsor Castle, which last hosted a royal wedding in May 2008 when Peter Phillips – son of The Princess Royal – married Autumn Kelly. Prince Edward also wed Sophie, the Countess of Wessex, there in June 1999; plus Prince Harry was christened there in 1984 by the Archbishop of Canterbury, Robert Runcie. Members of the public who have been invited to watch from the grounds of Windsor Castle will  begin to arrive from 9am. Guests will arrive between 9:30am and 11am; they will arrive at the castle’s Round Tower by coach and enter the chapel through the south door. At 11:20am, members of the Royal Family will arrive and enter the chapel through the Galilee Porch. Some will arrive in state car from the Royal Mews, including Bentleys, Rolls-Royces and Daimlers. Prince Harry and his brother and best man the Duke of Cambridge are expected to arrive at the chapel’s west steps at 11:45am. It is assumed they will enter the grounds on foot, giving Prince Harry the opportunity to walk past the crowds in the grounds. He will pass 200 representatives from charities he is associated with, who are expected to gather in the horseshoe cloister at the bottom of the steps. The Queen will be the final member of the Royal Family to arrive for the service, and is expected at 11:55am. The service will begin at 12pm, with Ms Markle due to arrive at the chapel’s west 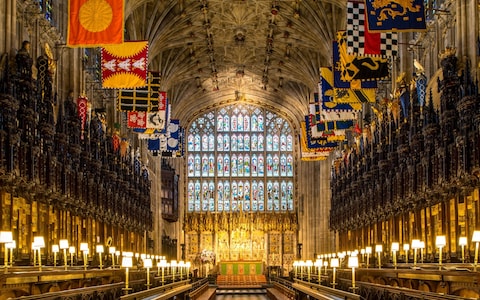 steps at 11:59am. She has chosen her mother, Doria, to travel with her to the wedding, travelling from their overnight accommodation to St George’s Chapel by car. The decision breaks with UK tradition, which usually sees the bride travel with her father before he gives her away in the wedding ceremony. Instead, Ms Markle wanted to include both parents in her wedding day. When the car stops at the castle, her mother will exchange places with the bridesmaids and pageboys. Ms Ragland will enter the chapel by the Galilee Porch. Meghan’s father will meet her at the chapel’s west door, before walking her down the aisle. The traditional ceremony will be conducted by the Dean of Windsor, The Rt Revd. David Conner while the Archbishop of Canterbury, Justin Welby, will officiate as the couple make their marriage vows. Under the guidance of Harry’s private secretary, Edward Lane Fox, the Lord Chamberlain’s Office is dealing with the ceremonial aspects of the day. It is assumed that Ms Markle is unlikely to opt to obey the prince and will probably choose the Series One (1966) Book of Common Prayer ceremony, just as the Duke and Duchess of Cambridge did. This allows the bride to drop the phrases “obey him” and “serve him” from the religious proceedings. Harry must decide whether to wear a wedding ring; William does not wear one. The regiments Prince Harry served with in Afghanistan will also have a “special place” during the ceremony. Household Cavalry troopers will line the staircase at St George’s Chapel, while streets within the precincts of the castle will be lined by members of the Windsor Castle Guard from 1st Battalion Irish Guards, and by Armed Forces personnel from the Royal Navy Small Ships and Diving, which has the Prince as Commodore-in-Chief, and the Royal Marines, where he is Captain General. The 3 Regiment Army Air Corps, where Prince Harry served as an Apache Pilot in Helmand Province, Afghanistan, will also be represented, as well as The Royal Gurkha Rifles, his comrades in Afghanistan in 2007, and RAF Honington, where he is Honorary Air Commandant. 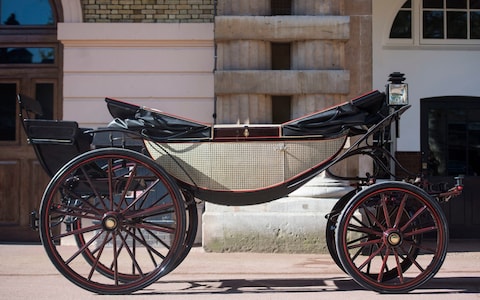 The service will end at 1pm and the newlyweds will leave the chapel at the west steps, before leaving the castle by carriage. Prince Harry and Ms Markle will be driven for two miles along Castle Hill, the High Street and into Windsor town centre before returning along the beautiful, tree-lined Long Walk for their reception. Kensington Palace has said: “Prince Harry and Ms Markle are very much looking forward to this short journey which they hope will be a memorable moment for everyone who has gathered together in Windsor to enjoy the atmosphere of this special day.” While we don’t know for sure how long the procession will take, a similar procession in 1999 by Edward and Sophie took 15 minutes. The best photo opportunity will be the West Steps of St George’s Chapel, when the bride and groom and their families emerge after the service. If you are lucky enough to be in Windsor on the day, head for the grass of the Horseshoe Cloisters opposite those steps for the view. The newlyweds will make their journey through Windsor in an open-topped Ascot Landau carriage, Kensington Palace has confirmed. It is the same carriage Prince Harry used in the procession at the wedding of Prince William and Kate Middleton, when he was surrounded by small bridesmaids and page boys. Crown Equerry Colonel Toby Browne, who runs the royal mews where the carriage was selected, said: “The fair weather option, the Ascot Landau, it was selected because it’s a wonderfully bright, small, lovely carriage. Very easy for people to see, the passengers can sit up quite high – so there’s lots of visibility for everybody. “It was built in 1883, it’s one of five that we have, most of them are down in Windsor, we always keep one in London for occasions.” If it rains on the wedding day, the wet weather option is the Scottish State Coach. Built in 1830, a new top was created in 1969 with large windows and a partial glass roof, to allow spectators to see the passengers. Six horses, Windsor Greys, will be included the procession ride. A team of four, Milford Haven, Plymouth and father and son Storm and Tyrone, will pull the Landau and two others – Sir Basil and Londonderry – will be outriders. All have been involved in high profile events before, including the Spanish state visit last year, Royal Ascot, Trooping the Colour, the State Opening of Parliament and the Lord Mayor’s Show.

They will be waved off by members of both families and the congregation will leave the chapel to see the newlyweds leave, before going to St George’s Hall for the lunchtime reception hosted by the Queen. While Prince Harry and Meghan Markle are touring Windsor, guests from the congregation will wait for the happy couple in St George’s Hall to celebrate the first of the day’s two receptions. This will be hosted by the Queen, will take place during the afternoon and will be attended by all guests who were invited to the service. Invitations have been posted to 600 lucky guests; royal sources have said the guest list has been restricted to those who have a direct relationship with the couple, both because St George’s Chapel is relatively small and because the prince is not in the direct line of succession. Some members of the public have received an invitation to wait in the grounds outside the chapel to watch the bride and groom and their wedding guests arrive and leave. From 7pm, a select 200 close friends will attend an after party hosted by the Prince of Wales at Frogmore House, Windsor. Half a mile away from Windsor Castle, the 17th century Grade I country house is owned by the Crown Estate and is part of the Frogmore Estate on the ground of the Home Park. Prince Harry and Ms Markle’s engagement photos were taken in the grounds of Frogmore House. The images were taken by photographer Alexi Lubomirski, who has also been chosen to take the photographs on the wedding day. Lubomirski, the British-born son of Peruvian-English mother and a Polish-French father, also happens to be a Prince himself: his full title is His Serene Highness Prince Alexi Lubomirski. It is expected that member of the Royal family, Ms Markle’s family and intimate friends of both the newlyweds will be at the evening reception – although Princess Charlotte and Prince George will no doubt have been put to bed after their big day in the limelight.

Will Prince William be at the FA Cup?

It has been announced that Prince William will be Prince Harry’s best man. The decision means the Duke, who is President of the Football Association, will not attend the FA Cup final, which is happening on the same day as the wedding. Scheduled to start at 17:15, the FA Cup final will see Chelsea and Manchester United go head to head for the title. Windsor Castle is about an hour’s drive from Wembley Stadium, which would have taken the Duke of Cambridge away from the proceedings for at least two hours. Asked how he felt about being chosen as Prince Harry’s best man, the Duke said: “It feels great. [I am] thrilled and delighted obviously. Revenge is sweet. I’ll be looking forward to it.” The Duke’s own stag do is reported to have been held on a Devon estate, Hartland Abbey, where he and close friends indulged in drinking, clay pigeon shooting, surfing and games.

Prince Harry went on to tease his brother mercilessly during a none-the-less heartfelt best man’s speech at the wedding reception, allegedly wearing a fez, mimicking the lovestruck conversations between a young Kate and William, and ridiculing his bald spot.