The Queen has met her latest great-grandchild, Prince Louis, for the first time on a visit to Kensington Palace. Her Majesty was flown into the grounds on Tuesday before being driven to the Duke and Duchess of Cambridge’s home. The 92-year-old monarch arrived from Windsor Castle, where the Duke of Edinburgh is recuperating following a hip operation. She held a posy of flowers as she stepped out of her helicopter after the 40-minute flight. The Queen was then driven the short distance to Prince William and Kate’s apartment in a green Range Rover. Prince Louis, who is now nine days old, is her sixth great-grandchild and the third child of the Duke and Duchess of Cambridge. 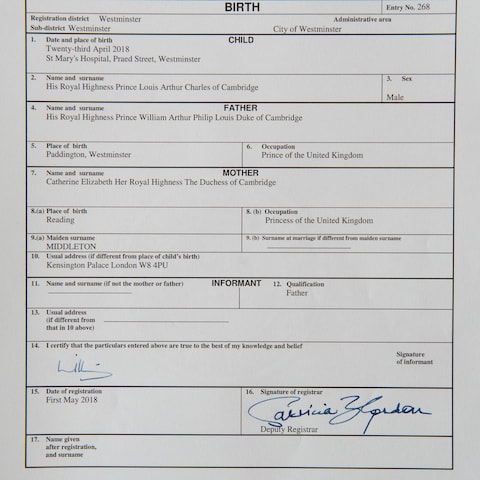 Another milestone was passed when the Duke sat down at Kensington Palace on Tuesday morning and signed the certificate registering his son’s birth, witnessed by Westminster City Council registrar Patricia Gordon. The document gives the full name of the latest member of the royal family as His Royal Highness Prince Louis Arthur Charles of Cambridge. The birth certificate lists the date and place of Louis’s birth, and also gives the family address as Kensington Palace. It gives the full name of Louis’ father and mother, and under “occupation” they are listed  as prince and princess of the United Kingdom respectively. The Duke, who is taking a period off following the birth of his son, simply signs the document William.