A flurry of flowers worth more than £110,000 scattered across Windsor, piles of sausage rolls stacked high on silver platters coming to £26,000, and a cool £1 million on a counter-drone system… These are just some of the items that may contribute to the £32 million estimated price tag for Prince Harry and Meghan Markle’s wedding. Wedding planning company Bridebook has calculated that the soon-to-be newlyweds’ big day, which is taking place in Windsor on May 19, is such that it would earn the couple a place on the list of the top 10 most expensive weddings of all time – ahead of William and Kate’s (estimated to have cost £20 million). It would be behind Charles and Diana’s, though,which is estimated to have cost £84 million; official figures for royal weddings are never released. Bridebook, which is planning the upcoming marriage between Millie Mackintosh and Hugo Taylor, says the bulk of the royal costs will be spent on security, with Meghan’s dress, the flowers, catering and drinks coming in at nearly a million pounds.

To start with, the leafy town of Windsor will be locked down for the day, with a heavy police presence, crowd control and restrictions placed on shops and restaurants. The security measures, which may include snipers, undercover police and military technologies such as a counter-drone system, could cost the nation as much as £30 million, according to Bridebook (though other estimates round it down to nearer £24 million). The security cost is expected to be higher than that for

William and Kate’s wedding – even though theirs was larger, and held in London – due to the ongoing terrorist threat level. Harry’s military background as well as the amount of racist comments directed at Markle is believed to have increased the security quotient. Which means after the event has been locked down, Harry and Meghan will have a rather modest-looking £2 million for the wedding itself. According to high-end wedding planners, Quintessentially, you can still put on a pretty decent bash, complete with luxurious invitations to a beautiful wedding breakfast for 600 guests. Bridebook’s breakdown of the wedding cost includes £90,000 for 20 silver-plated trumpets that will announce the event, £50,000 on the lemon elderflower cake from Violet Bakery in east London, and £110,000 on flowers to adorn the aisles of St George’s Chapel at Windsor Castle and St George’s Great Hall, where the first reception will be held. The glass marquee that will be the centrepiece for the evening reception in the grounds of Frogmore House

can cost around £300,000 to hire. The company says Harry and Meghan could also be forking out £26,000 on sausage rolls and hot tea for the 2,640 members of the public who have been invited into the ground of Windsor for the big day. One of the biggest costs, according to the company’s estimates, will be Meghan’s dress, which which designer Ralph and Russo is rumoured to be making and could be worth between £300,000 and £400,000. But royal expert Katie Nicholl, author of Harry: Life, Loss and Love, says such figures are “wildly inaccurate”. “Meghan is very mindful of wanting to send the right message with her gown,” says Nicholl. “It’s going to be iconic and fit the backdrop of Windsor Castle, but it would send off the wrong message to wear a dress that in cost alone would upstage Kate’s.” Kate wore a Sarah Burton for Alexander McQueen dress rumoured to have cost £250,000. That isn’t to say Meghan’s dress won’t be a spectacle. “Ralph and Russo are famous for their showstopping, elaborate and incredibly beautiful handmade couture gowns,” says Nicholl, adding that it will likely be paired with a tiara on loan from the Queen and an item of jewelry from D

iana’s personal collection. Jessica Seal, director of weddings and private events at high-end planners Quintessentially, adds: “As Meghan is quite cool and understated, she might pay in the £60,000 range for her dress.” She is then expected to change into a second dress for the evening. The budget for Harry and Meghan’s big day is a far cry from some of the world’s most luxurious weddings. The 2017 marriage of Russian oligarch Aleksey Shapovalov to Ksenia Tsaritsina, in Moscow, was described as one of the most lavish ever, and featured an eight-tier “floating” cake, a £7.7 million, 70-carat diamond ring, two dresses and a performance from Eurovision runner-up Polina Gagarina. Such extravagance wouldn’t be in keeping with what we know about Harry and Meghan. Mark Niemierko, who has planned weddings attended by royalty, says the couple will probably lean more towards low-key than lavish. “I know the royal family, and they don’t spend money,” says Niemierko. “Everyone thinks the royals are like the Kardashians, but they’re the total opposite. They find it crass to be over-the-top.” Rather than spending extortionate amounts on the dress, jewelry and flowers, Niemierko says Harry and Meghan will opt for understated options. Aside from the cost of Meghan’s dress and the wedding security – which will most likely be paid for by the bride’s family and out of the public purse, respectively – Niemierko expects Prince Charles will spend just £500,000 on behalf of the royal 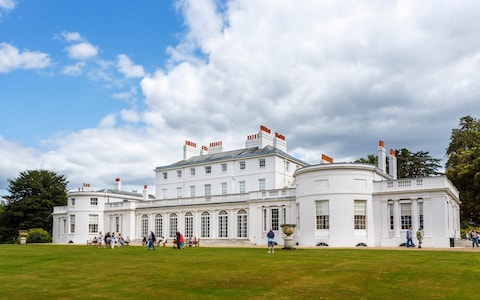 pair. One of the biggest expenses, he says, will be the evening party. “The dinner-and-dancing part will be the real celebration,” says Niemierko. “The Queen will most likely not be present, so everyone can let their hair down and have some fun.” The costs of night-time festivities can easily rack up, he explains. Lighting, sound and bespoke bar designs are pricey, while small touches, such as mirrorballs, have been known to cost £11,000 alone. The other question is whether a famous musical act is to perform. Kate and William held their evening party in the throne room at Buckingham Palace, which was converted into a nightclub for the occasion. This would have cost around £50,000, says Niemierko, while an act such as Ellie Goulding can command around £100,000 for a one-off performance. But, Niemierko anticipates, “they’re not going to go mad”. “With Meghan there, I think Harry might toe the line. All of Harry’s friends are married now, and William’s a father.” “There was a rumour that the Spice Girls might play, but that would cost an average Joe a fortune – about £1 million for each band member.” That said, because of the historic nature of the event – and the global coverage it will receive – the wedding singers would likely drop their price. The same goes for dressmakers, florists, caterers and designers: “The royals get a lot more for their money because people are happy to do things for free,” says Niemierko. So perhaps it won’t leave quite such a dent in the families’ pockets, after all.