It took the men most of the night to bury the bodies. They dug the dry earth with whatever they had to hand – mostly small tools which made for a laborious task. But it was no ordinary burial and when they were done, instead of marking the site with headstones and flowers they covered it over with weeds and dirt. The bodies were some of the 48 victims of a suspected chemical attack on the Syrian town of Douma in Eastern Ghouta. The diggers were local residents and members of the Jaish al-Islam rebel group attempting to preserve what could become the most important evidence from the night of April 7. They hope the corpses will help the UN-backed Organisation for the Prohibition of Chemical Weapons (OPCW) establish whether, and which, chemicals were used. “Only three or four men know where the site is,” Brigadier General Zaher al-Sakat, Syria’s former chemical weapons chief who defected several years ago, told the Telegraph. “They were buried just as they were found. It will be easy to get samples from the hair and clothes and eventually prove what was used.”

On Saturday, after waiting for a week for clearance from Damascus, chemical weapons inspectors finally entered Douma. The nine-strong team from the OPCW were able to collect samples from the town two weeks after the attack. Syria and Russia, which backs the regime and has military police controlling the three-storey house in Douma where the victims died, have been accused by the US of deliberately obstructing the inspectors, giving themselves time to potentially tamper with the evidence. The diggers this week gave the coordinates of the burial site to Raed Saleh, the head of the White Helmets, a group of civil defence rescuers who operate in opposition areas. Mr Saleh has since passed them to the OPCW. But the site of the bodies, which had been under Jaish al-Islam’s control, has now fallen into government hands. And while the regime does not yet know the location, the OPCW is dependent on it for access. Jerry Smith, a former OPCW weapons inspector who worked in Syria in 2013, told the Sunday Telegraph the watchdog has no choice but to wait for the approval of host states. “In cases like this there could be stakeholders who don’t want the truth to come out, or want their truth to come out,” said Mr Smith, who is now managing director of RameHead Consulting International in Salisbury. “They have the ability to exert that influence on the investigation.” He said that while the delay was a concern it was “almost impossible” to completely destroy all traces of a chemical attack involving nerve agent, which doctors suspect was mixed with less toxic chlorine. Nerve agents like sarin rapidly degrade in normal environmental conditions, however he said they can “hang around for some time.” “There are examples of samples being taken in Halabja several years after the Saddam (Hussein) attacks which showed nerve agents”, he said, adding that “micro quantities” smaller than a pinhead can become trapped in soil and clay. “They have key markers which have no alternative explanation.” However, the presence of chlorine can be more difficult to establish, particularly after such a long period of time, and it is difficult to prove whether it was administered in weaponised form because it is used for many other purposes. He said the OPCW will be looking to gather three types of evidence: biological and environmental samples, statements from survivors, and documentary evidence such as videos and pictures.

A number of survivors fled to rebel-held Idlib in northern Syria near the Turkish border and will likely be questioned. Eastern Ghouta saw an even deadlier chemical attack in 2013, when more than 1,200 people died and thousands more were injured. The OPCW later confirmed in its report that sarin had been used. The government, under pressure from Russia, subsequently agreed to hand over its entire stockpile in 2014. However, Brig Gen Sakat and others believe they did not declare a substantial amount of sarin and other precursor chemicals, which they still possess. The US and its allies have said they hold both the regime and Russia responsible for the Douma attack, and Moscow has since launched a considerable disinformation campaign to deflect blame. Russian officials have offered contradictory explanations for what happened on April 7. Theories propagated include that there was no chemical attack, then that there in fact had been a chemical attack but it was carried out by rebels, and lastly that it was a “false flag” operation by the UK and White Helmets. Influential social media activists and bloggers have seized on the theory that it was carried out by jihadist groups or spies in order to put the blame on the Bashar al-Assad government and provide a justification for Western intervention. The swirl of disinformation has not been helped by the silence of many of the key witnesses, who have found themselves at the centre of an escalating international conflict.

According to organisations supporting hospitals in Syria, many of their medics who treated patients that night have since left Eastern Ghouta for rebel-held areas elsewhere in the country. Dr Ghanem Tayara, Birmingham GP and director of the

Union of Medical Care and Relief Organisations (UOSSM) – the largest medical relief agency in Syria – claims they were searched for samples and potential evidence before they did. Many are too scared to speak out publicly because they have family members in government-held areas. Meanwhile some of those who decided to stay in Douma have since recanted accounts they gave to UOSSM at the time. After Russia took control of Eastern Ghouta on April 12 – days after the attack pushed Jaish al-Islam to agree a surrender deal – interviews with doctors, nurses and medical students who treated the patients were broadcast. Some 13 appeared on a pro-government TV channel saying they had not seen any cases of chemical exposure, but had seen many suffering asthma attacks prompted by the dust from an airstrike and the panic that followed. Some the Telegraph spoke to who know the medics say they believe they were speaking under duress. Zaher al-Sahloul, a Syrian-American doctor and adviser to the UOSSM, said: “We know these people very well, they were our physicians. “At least half of those appearing in these interviews communicated with our teams (in Turkey and the US) about the chemical attack and what symptoms they saw in the patients. They changed their statements after the Russians took over. “I’m sure they are not just fearing for their lives but the lives of their relatives too, that is to be expected.”

Dr Sahloul said one senior doctor in Douma made contact with a Russian official while the town was still under opposition control, asking to be allowed to stay and not be sent to Idlib. “Part of the deal they agreed was for him to convince the other doctors to stay under certain terms, but I don’t think the doctors expected to be put 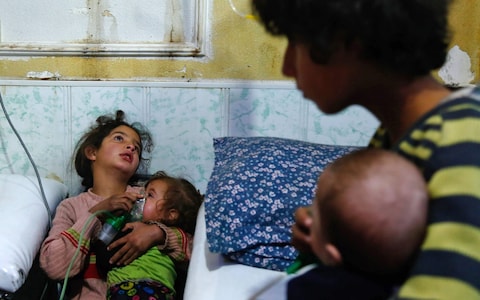 under this much pressure,” he said. Asked if he considered it a betrayal, he said: “Of course not, they are under unbelievable stress. I would have done the same myself to protect my family.” Dr Sahloul is confident, however, that eventually “the truth will out”, as too are the chemical weapons experts. “The science always beats the politics,” said Mr Smith. “And when you get the science right, it’s irrefutable, whatever the crazies might say.”