Russia compared the British government to Inspector LeStrade, a “hapless” investigator from Sir Arthur Conan Doyle’s Sherlock Holmes stories, as it denied responsibility for the poisoning of Sergei Skripal. The bizarre comments were made by Vasily Nebenzya, the Russian permanent representative to the UN, who also suggested the UK or others could have tried to kill Mr Skripal in act of “black PR” designed to “tarnish Russia”. He also suggested that the British public were “not well educated” and being “influenced” by their government. In a lengthy address to the UN Security Council Mr Nebenzya said: “Sir Arthur Conan Doyle, the British classic, famed in his country and very popular in Russia, has a hapless character, Inspector LeStrade from Scotland Yard. “He doesn’t have the methods of deduction, he is not particularly smart. His role is to be the background for the extraordinary deductive powers of Sherlock Holmes. “LeStrade latches on to something that is on the surface of a crime and is in a hurry to prove banal conclusions 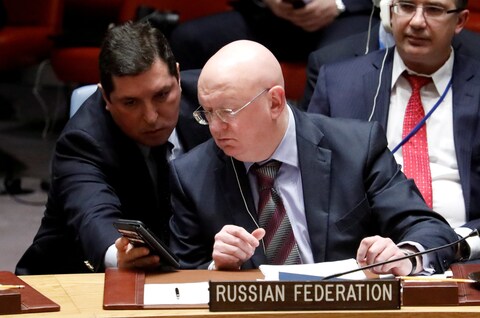 only to be overturned by Sherlock Holmes, who always finds what is behind the crime and what is the motive for it. “I’m not saying people working at Scotland Yard today are not professional, God guard me from that, but I do think we could all benefit from having a Sherlock Holmes with us today.” He added: “The collective Inspector LeStrades today are high level members of the UK government who are coming up with egregious, superficial and unsupported accusations which have far reaching consequences.” Mr Nebenzya went on: “Is this incident something that benefits Russia on the eve of presidential elections and the world football championships? I can think of a number of countries who would benefit a great deal from this incident and blaming Russia for it.” He said Mr Skripal had no longer been any threat to Russia. “But he is a perfect victim which could justify any unthinkable lie, any kind of dirt or black PR tarnishing Russia,” he said. “We are witnessing that the authorities of the UK are constantly trying to tarnish Russia, stooping to any low. He said: “A hysterical atmosphere is being created by London and they are being completely non-transparent in this. They are trying to influence the public which is very easy to influence and not well educated.” Mr Nebenzya accused the UK of “using the language of the 19th Century and colonialism”. He added: “The ultimatum from London is something we can’t pay attention to and we consider it null and void. We have nothing to fear, we have nothing to hide. “We do not speak the language of ultimatums. We will not allow anyone to speak to us in that language, but we are polite.” On Mrs May’s letter he said it contained “completely irresponsible statements,” adding: “It’s difficult  for me even to comment using diplomatic vocabulary. It contains threats to a sovereign nation. Russia had nothing to do with this incident.”