How the ‘Fab Four’ young royals are transforming the monarchy.

It was a slogan that quickly acquired an added significance. At Wednesday’s forum of the Royal Foundation, the charity begun by Princes William and Harry in 2009 and since joined by the Duchess 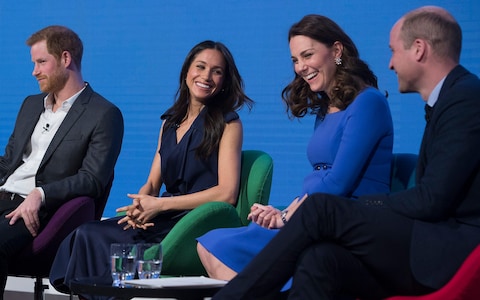 of Cambridge, ‘Making A Difference Together’ flagged up the variety of initiatives currently under the charity’s umbrella, including the Heads Together mental health campaign and Invictus Games for ex-service personnel. As the first joint engagement of the Duke and Duchess of Cambridge, Prince Harry and his soon-to-be bride Meghan Markle, its message of togetherness appeared to refer as much to its royal patrons as its mission. Reporters across the globe labelled them the ‘Fab Four’. And the message was clear: power takes many forms. When, in the future, Prince William succeeds to the throne as Britain’s King William V, his influence on the nation’s politics and government will be a fraction of that enjoyed by his most recent namesake, Queen Victoria’s plain-speaking sailor uncle, William IV. Wednesday showed that whatever the next King William lacks in old-fashioned executive power, his power to shape the national dialogue remains every bit as strong as that of any of his forebears. As long, it seems, as he works alongside his immediate family. The flurry of interest in Wednesday’s panel discussion, spiked by curiosity about Meghan in her role as newest royal recruit, focused on a joint undertaking by four young people committed to positive change in the world around them. There was the usual William-and-Harry brotherly banter, with jokey references to sibling arguments. William paid tribute to Catherine’s key role in Heads Together. Catherine applauded William’s welcome to Meghan, neatly short-circuiting suggestions of rivalry between the prospective sisters-in-law. Instead, what distinguished Wednesday’s discussion was the tangible sense of all the key players enjoying working together as a team. As a foursome, William, Harry, Catherine and Meghan made sure that ‘Making A Difference Together’ avoided becoming just another example of empty corporate rhetoric. Around the world, the response was overwhelmingly positive. There’s nothing new about a royal involvement with charities. Prince William pecifically referenced the princes’ initiatives as the latest chapter in the Windsors’ ongoing promotion of the voluntary sector. “Our job,” he said, “was to follow the example of those who had come before us, hold on to the values that have always guided our family, but seek to engage in public life in a way that was updated and relevant for our generation.” It is the Prince’s version of what historian Frank Prochaska, in his study Royal Bounty, calls the ‘welfare monarchy’. Prochaska traces the impulse back nearly 200 years to Prince Albert. Albert was appalled by his in-laws. In Queen Victoria’s uncles and aunts, the loose-living, heavy drinking, spendthrift children of George III, Albert thought he saw a group of disreputable reprobates almost certain to spell the end of the monarchy. Victoria’s reign, he was

, would be different. His vision of monarchy focused on a royal family closely involved with charity and philanthropy, living an exemplary family life. It was Albert’s way of extending royal influence and authority while Victoria’s real political power dwindled, and it’s the model every subsequent sovereign has followed. For William and Harry, charity is embedded in their DNA. Members of the royal family are currently involved with more than 3,000 charitable and voluntary organisations. Prince William has publicly praised his parents, the Prince of Wales and Diana, Princess of Wales, as “an example of diligence, compassion and duty”. Of his grandparents, the Queen and the Duke of Edinburgh, he said that they had made “support for charity central to their decades of service to the nation and the Commonwealth”. The Duke of Edinburgh’s wide-ranging charitable commitments embraced conservation, industry, design, engineering, technology, sport, even school playing fields, and the award scheme named after him has successfully promoted community service and practical skills for young people since 1956. Charities founded by the Prince of Wales currently raise more than £150 million a year for causes as diverse as disadvantaged British youngsters, the unemployed over-50s in Wales and poverty in South Asia. Of the 13 charities operating under the umbrella of The Prince’s Charities, 12 were started by the Prince himself. Beginning with The Prince’s Trust in the mid-1970s, his charitable legacy eclipses the achievements of any previous Prince of Wales and, as William and Harry recognise, sets tough targets for his successors. Both young princes are involved in charities previously associated with their mother, including AIDS charities, the Halo Trust, which fights the use of land mines, and African wildlife and conservation organisations. The Princess of Wales is credited with revolutionising the royal family’s approach to charitable patronage. Her involvement with sexual and mental health charities, once taboo areas, played a key part in modernising the royal family’s charitable remit. Even before their divorce, however, the Prince and Princess of Wales pursued largely separate charitable commitments. Over time suggestions of competitiveness in their public lives increased. That Princes William and Harry have chosen to work together, alongside Catherine and Meghan, concentrates their efforts on their chosen goals. And, as Wednesday proved, in a digital age in which journalists and commentators operate across a broad spectrum of media, it allows them to promote their causes quickly and with huge impact. Teamwork on this scale is a new take on previous royal approaches. Royals have shared engagements in the past, especially parents and children. The widowed Queen Victoria was invariably accompanied on public appearances by at least one of her daughters or granddaughters. On different occasions all of Elizabeth II’s children have joined her in her work with her 800 patronages, as have Princesses Beatrice and Eugenie. But few of these engagements have represented a genuine joint effort. The Royal Foundation, a shared initiative from the outset, has grown from a two- to a three- and, from May, a four-patron organisation, in which every player, despite their varied interests, works towards shared aims in consultation with one another – even if what this means in practice, as Prince Harry explained, is scribbling the germ of an idea on the back of a cigarette packet. It may be that, in the long term, questions will be asked about the viability of Wednesday’s approach. Already there are too few members of the Royal family to satisfy charities’ demands for royal patronage. In the future, it seems likely that the Royal family will shrink in size, with the retirement and deaths of the senior generation of royals, including the Queen’s cousins, the Dukes of Kent and Gloucester and Princess Alexandra. Their combined workload, and that of the Queen’s children, is significant and will one day form part of William, Harry, Catherine and Meghan’s inheritance. For the moment, no one is complaining. The Fab Four have shown that joint action can achieve international results. This week’s informal discussion successfully raised the profile of the Royal Foundation and promoted its aims across the globe. It also banished the spectre of It’s a Royal Knockout, that June day in 1987, when, in the interests of charity, the Princess Royal, the Duke and Duchess of York and Prince Edward played party games with celebrities and were widely credited with destroying last vestiges of royal mystique.