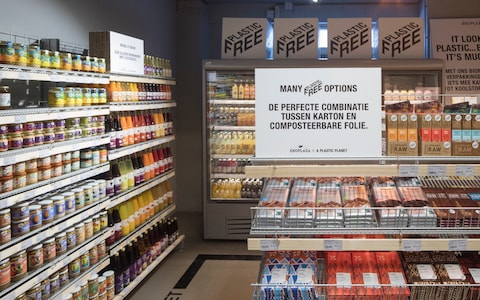 A Dutch company has launched the “world’s first plastic free aisle” in a move which could put Theresa May’s proposal for British supermarkets to the test. Ekoplaza, an organic chain, opens its “Ekoplaza Lab” just off a major shopping street in Amsterdam West on Wednesday, in collaboration with a British campaign group. Instead of plastic light fittings, there are lampshades reclaimed from other stores, metal-and-wood shelves and cardboard labels. But most importantly, all 700 products from fresh meat to lentils in this 60sqm corner space are wrapped in compostable biomaterials. “This is not tokenism,” insists Sian Sutherland, co-founder of campaign group A Plastic Planet and a partner in the initiative. “This goes all the way, and I feel the public is ready. Plastic is a miracle material, but we are throwing it into our fields and oceans. In food and drink packaging, let’s use materials that nature can handle.” The launch is the first step to making Ekoplaza’s 74 stores plastic free – potentially in 2018 – to help combat packaging pollution that, according to the Ellen MacArthur Foundation, 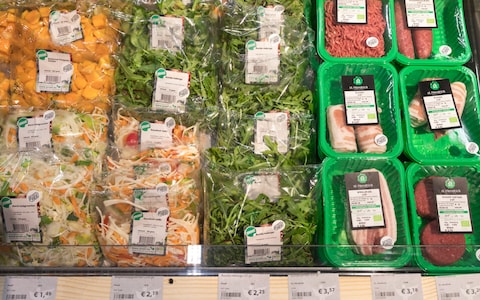 will lead to more plastic than fish in the ocean by 2050. This is also thought to be the first major test case of Mrs May’s recent proposal for plastics-free aisles in UK stores, to end the “immense suffering” of sea creatures when they eat or are entangled in non-biodegradable plastic. Ekoplaza managing director Erik Does said the biomaterials zone is a conscious policy, not a marketing stunt. A plastic free aisle is a nice visual step in a process we’ve been engaged with for years,” he said. “Plastic soup [ocean waste] is a huge problem, that we are very conscious of as a business. Not only in our stores but also in wholesale trade, we avoid plastic wherever possible. However, we cannot do it alone and only with our suppliers can we move to a plastic-free supermarket.” In Britain, Iceland managing director Richard Walker – who is leading the supermarket’s campaign to eliminate single-use plastics by 2023 –is watching closely and planning to talk to Ekoplaza about its experiment, a spokesman confirmed. Meanwhile Ekoplaza suppliers such as compostable cellophane maker Futamura – whose wrappers encase Quality Street sweets – are hopeful. “In the end, customers see what the retailers put on the shelves,” says marketing manager Andy Sweetman. “The creation of the so-called plastics-free aisle is a potential game-changer in the adoption of readily renewable and compostable biomaterials.” Back in Amsterdam, construction project manager 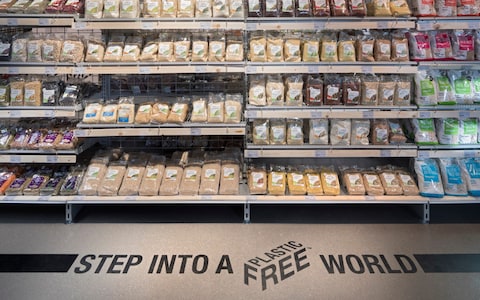 Remko van Abeelen, said a plastic-free fit out has been a challenge. “I can’t just hang up a lamp,” he said. “We even had to find something else for the product labels. I’m aware of plastics and I separate them to recycle at home – but this is a plastic-free shopping experience, and it will set up a momentum.” Shopper Otto Daems, from Amsterdam, was also keen. “I’m a construction worker and sometimes my recycled plastic material is wrapped in three layers of the stuff,” he said. “I would love to avoid plastic but it’s so integrated in society, it’s practically impossible. This is a good idea, and I would pay a bit more for it.” A Plastic Planet is campaigning for industrial composting facilities too, and some experts believe this is an essential element. Christiaan Bolck, responsible for applied research on sustainable packaging at 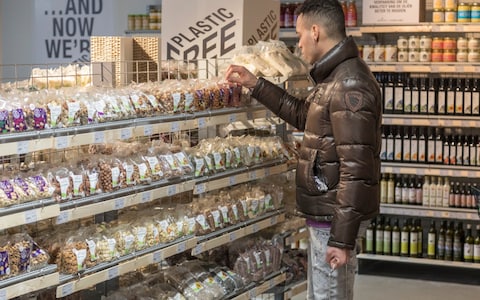 Wageningen University & Research in the Netherlands, said it would be best to recycle all packaging. “When you have a system of collecting organic waste, it makes sense to collect leftover food and such packaging materials,” he said. “I think the circular economy is a good idea, when you don’t discard materials but try to reuse them.” In 2016 a totally packaging-free Dutch store called Opgeweckt Noord in Groningen closed because people’s enthusiasm didn’t mean they were ready to change their behaviour, according to its parting Facebook message. But, says Sutherland, the whole point of this plastic-free aisle is to be commercially viable, scalable and “totally convenient”. She believes that, after David Attenborough’s Blue Planet II documentary series brought the pollution issue to a mass audience, consumers want action. “Supermarkets talk to me about the Blue Planet effect,” she said. “The world is ready and consumers want change.”