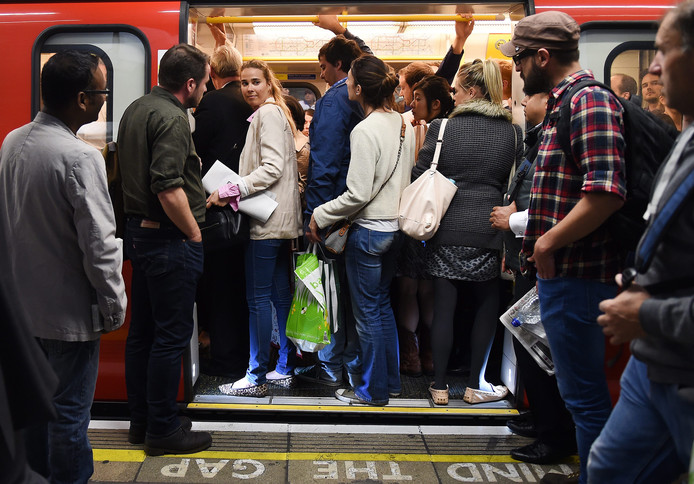 The London metro makes so much noise that travelers are wise to use earplugs. That is the conclusion of the University College London (UCL) that researched the number of decibels that ‘the Tube’ produces. The scientists discovered that people are exposed to more noise during a subway ride in the British capital than during a rock concert. The noisiest route is the Victoria Line. Between Liverpool Street and Bethnal Green stations. The measuring equipment gave no less than 109 decibels. A drill or standing next to a rising helicopter is less harmful to the hearing. “It is worrying,” writes UCL researcher Joe Sollini. “Hearing loss builds up with the passing of the years.”
Employers are obliged to offer people who spend longer periods of time in workplaces with more than 85 decibels of hearing protection, Sollini knows. “Now it turns out that someone who travels with the metro every day for a long time runs the risk of tinnitus and hearing loss.” The British Institute for Acoustics calls on the London transport company to develop quieter subways. ,, That has already happened with trains. Less noisy subways provide passengers with a better journey. ”

Previously, American audiologists were alarmed by the noise in the New York subway. For example, the iron-on iron on the Times Square station proved to be between 92 and 102 decibels. The city council then decided to tackle the noise. For example, employees regularly lubricate the rails in sharp turns and the wheels and braking systems of the metro sets have been adapted.

In the Netherlands, residents of the Rotterdam metro net filed objections to noise pollution. Among other things, in Spijkenisse and Capelle aan den IJssel, the complainants asked for the slower passing of the subways, so that the noise diminished.