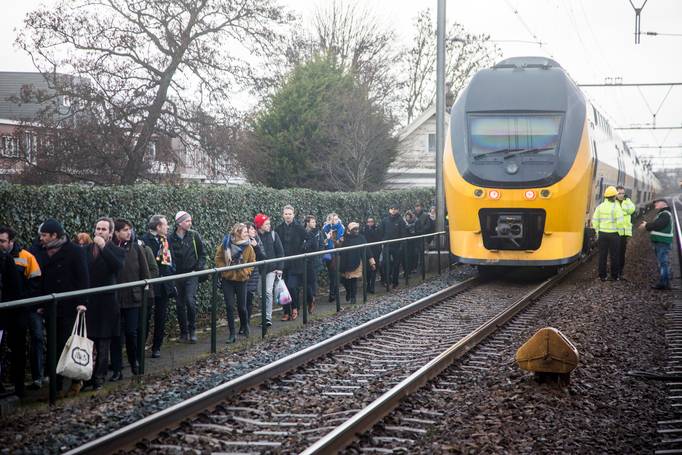 NOTA BENE: this article was published 19th January, 2018 at 06:45AM. Several figures about the damage have changed meanwhile.

1 How strong was this gale?
The storm broke into the Netherlands and at its peak reached wind force 11 Bft.. “Since 1910 a storm with this force has only occurred thirteen times”, says Diana Woei of Weerplaza. “In addition to the average strength of the storm, gusts of wind are measured of more than 120 kph, almost hurricane power.”

2 People were blowing across the street. How can such a thing be?
On social media many videos popped up of people who came off the sidewalk and flew a bit or had to cling to a lamppost in order not to blow over. “That someone was blown off his feet is not that strange at such wind speeds,” Woei says. ,,A child flies in the round at wind force 9 Bft.. The wind was now considerably harder. Wind force 11 Bft. is strong enough to bring down an adult.”

3 How exactly did this storm happen?
The storm built up in the Canadian Newfoundland, says Woei. “Due to falling air pressure, there is movement around the center of the low-pressure area. Because of the rotation of the earth, it moves to the right. The low-pressure area draws in air and this creates wind that can easily get storm force. ” Officially, there is a storm at wind force 9 Bft.. That force was reached yesterday at the beginning of the morning and then quickly gained strength. On the coast the wind was already lying around noon, in the east it lasted until the second half of the afternoon.

4 Have we been sufficiently warned?
After the exceptionally heavy storm of January 25, 1990, in which seventeen were killed, the KNMI decided to issue warnings in extreme weather conditions. Even before the storm erupted yesterday, the meteorological institute announced code orange. In the course of the morning the KNMI scaled that up to code red. “With such a warning people are strongly advised not to go on the road. The fact that many people do that and run a risk is their own responsibility, “according to the meteorological institute.

5 Why could the trains not run and was Schiphol completely paralyzed?
At 11.00 hours the NS pulled the plug out. The weather turned out to be too rough to continue. ProRail had 150 damage reports last night, of which ’30 to 40 larger incidents’. In 40 places, trees had been blown over, at some 30 places overhead lines were broken. Damage was also at train stations. Glass plates came down at The Hague Central Station; the station was closed for some time. At a quarter past 11, Schiphol was almost completely locked. It was still started and landed. Departure halls 1 and 2 closed because roof plates flew from the terminal. Schiphol was operational again at 1 PM. A total of 320 flights were canceled.

6 What caused all those trucks to blow?
The Traffic Information Service had at least 66 trucks that were tilted because of the strong wind. “Those trucks are real wind catchers, especially when they are driving without load,” says Arnoud Broekhuis of the ANWB Traffic Center. “The drivers know the dangers, but they take the guess. On all north-south connections trucks rolled on the bridges and traffic stopped. “There is no prohibition to drive trucks in a storm. The ANWB has the impression that the daredevils were partly Polish truckers. “We are thinking with Transport and Logistics Netherlands about how we can reach this group in situations like this. Maybe with icons and signs in other languages. “

7 Does the insurance cover the storm damage?
Almost all homeowners have a home insurance policy that covers damage to homes, such as broken roof tiles or damage caused by falling trees. Comparison site for insurance policies Independer reports that insurers will reimburse if the wind force is 7 or more. However, there is often a higher deductible for storm damage. Branches and trees on cars is another story. That depends on the car insurance. Those who are only insured with WA, have bad luck. Unless that fallen tree of the municipality was already rotten and the municipality had already been pointed out several times. But legally that is almost impossible to make. The level of damage is expected later today, but is probably in the tens of millions of euros.

The damage of the last gale is even worse than expected.