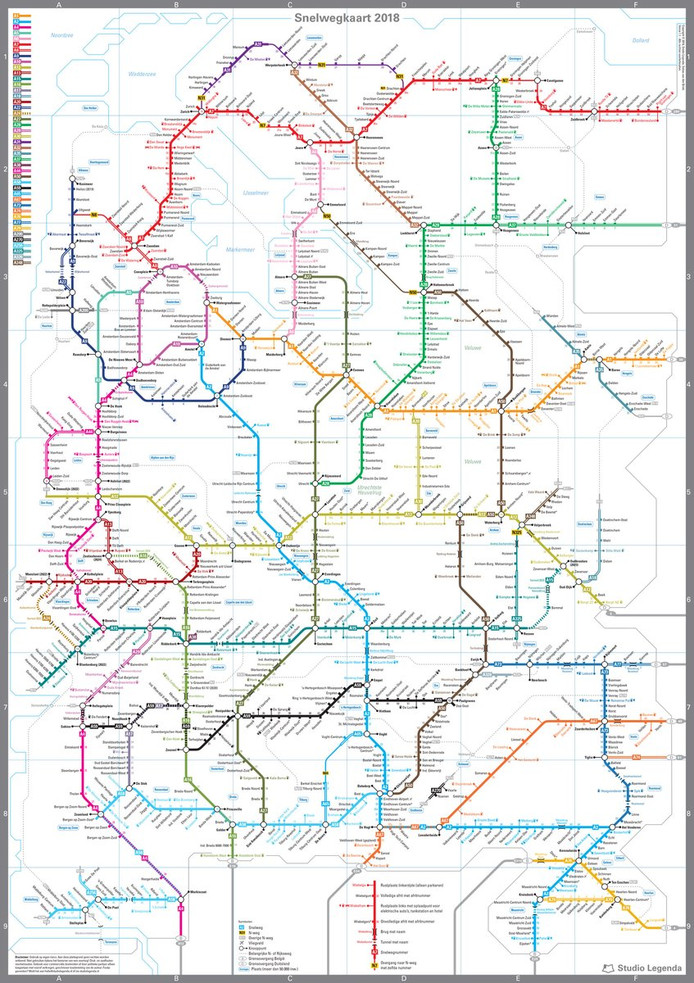 Map lover Sebas van den Brink from Groningen probably made the most beautiful map of the Netherlands. In his spare hours, the illustrator put the Netherlands’ motorway network on a metromap. It yields an intriguing card. It is just as good looking, but then you see it immediately: the metro map that Van den Brink made of the Dutch motorways is very special. “It is more of a map to hang and look at than to fuse away in your glove box,” says Van den Brink. “The distances are not correct, just like with a real metro map. But those are the compromises you make. Otherwise, for example, the highway to Walcheren could not have done it.” The Netherlands lends itself particularly well to making this map, the Groningen illustrator discovered. “It is, if we ignore Limburg, a fairly rectangular country. That’s why it fits well. That is very different for a country like Germany or France.” The artist likes to draw floor plans from a very early age. He calls himself a map-geek (card game) for a reason. I always liked to create fantasy countries. No one who says to you: ‘That is not possible or that is not true’. And I also make maps for my work from time to time. But this highway folder really came into being as a hobby.” It was quite a job to get all those highways, exits, driveways and junctions well on paper. ,,It is an accurate puzzle. I also wanted to have all aqueducts and tunnels on it. It must be true, of course, but I also want it to look good. Making this card was an experiment for me. If it succeeds, that’s fun.” Van den Brink also made a metromap from his hometown Groningen. He is now also planning to take over all Dutch big cities. And from next week the posters of the Dutch motorway network are for sale. ,,It seems to speak to the imagination. We all know the Netherlands as a lion, and that is what we have already received at primary school. But on my map you can see that it is also fun to view our country in a different way.”