After a long, dark winter gardeners are finally taking advantage of the unseasonably warm weather to dust off their power tools and do some spring pruning. But while mowers and strimmers are quick and efficient at keeping unruly edges looking neat and tidy, they are playing havoc with the UK’s hedgehog population. This weekend’s warm weather, while welcomed by many, could prove fatal for the hedgehogs who are waking early from hibernation to go out in search of food in longer grass and around garden borders. This weekend, St Tiggywinkles Wildlife Hospital, in Haddnham, Bucks, said it had treated three hedgehogs injured by a strimmer.

Two of the prickly mammals suffered head injuries and the third was found with a “deep cut”. A spokesman for the animal hospital said: “Now the weather is getting better we are seeing an increase in animals being accidentally injured when people are gardening. “Please do carefully check before cutting long grass and plants as hedgehogs and other small animals will likely be hiding there. “Go over the area and disturb the vegetation with a soft broom to see who is hiding and make sure the area is clear before you begin. “All three hedgehogs are still with us and receiving treatment for their wounds. We are hopeful they will make it.” The hedgehog was once a common sight in Britain, with the population estimated at 30million in the 1950s. But that has dropped to fewer than one million today, with a third of this loss thought to have taken place in the past decade.

The latest survey, conducted with more than 2,600 people by BBC Gardeners’ World Magazine, found that 51 per cent of people did not see a hedgehog at all in 2016, up from 48 per cent in 2015. Naturalist Simon King explained that the hedgehog’s flight or fright response was an issue when it came to power tools in the garden. “When a hedgehog is scared it curls into a ball to defend itself behind its spiney coat,” he said. “Sadly there is no defence against modern garden machinery like strimmers, which can cause horrendous and often deadly injures.” 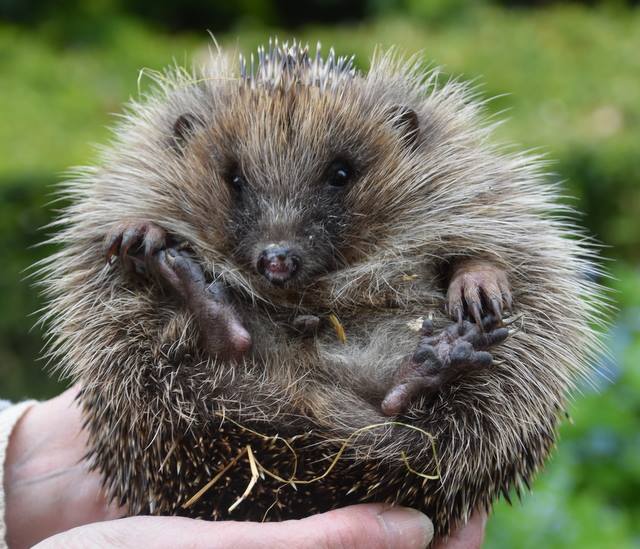 And it isn’t just home gardeners using strimmers which are causing problems for the hedgehog populations. Willows Hedgehog Rescue centre in Bromsgrove, Worcestershire has been working with councils, contractors and housing trusts around the UK to help raise awareness of the damage caused by large-scale strimming equipment used to maintain large expanses of hedgerow and verges. A spokesman said: “ These areas provide important habitat for hedgehogs and while leaving areas wild is preferable for wildlife where they do need to be cut operators need to be aware of the potential danger for wildlife if the area is not checked first.” The rescue centre has also teamed up with manufacturers to attach special warning stickers to their strimming equipment to remind gardeners to check for hedgehogs. “Hopefully by attaching the wildlife warning labels to equipment and by the inclusion of awareness in operator training etc we will be able to reduce the number of hedgehog casualties,” the spokesman said.

As well as checking areas before cutting there are other things gardenres can do to help hedgehogs.